In a slide presented during their Q3 earnings call, Asus disclosed plans to release a tablet running Windows 8 in Q3 of next year.

The good news for Microsoft, at least for the moment, is the number 2 tablet OS, Android, has yet to make a significant mark. Of course that could change by the time Windows 8 launches next year.

Putting Windows on a tablet does, in theory, have some advantages over either iOS or Android. Where iOS and Android are essentially phone operating systems upscaled for tablet use, Windows 8 on a tablet will be similar in many ways to a desktop experience.

At the same time, consumers could be turned off by a lack of compatibility with existing applications due to processor and interface limitations on tablets.

From Microsoft's point of view, Asus might be the best possible partner for such a product thanks to their preference for selling tablets with keyboard and trackpad equipped docking stations. Arguably that's the best way to show of Windows 8's capabilities. 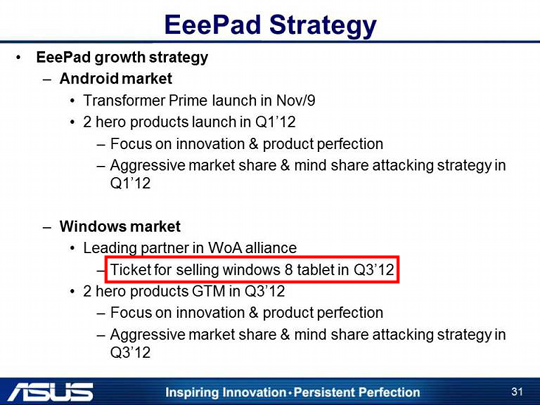