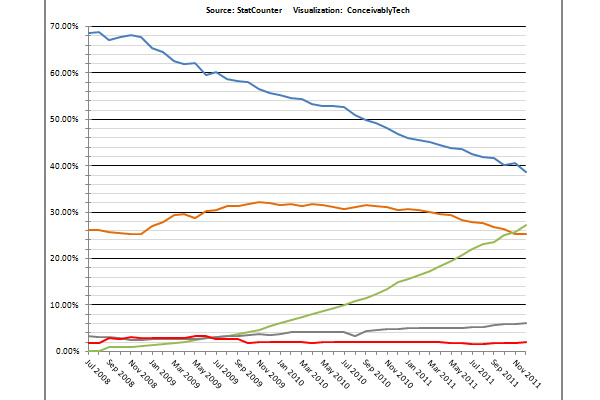 According to the latest data from StatCounter, Google's Chrome browser has finally surpassed Firefox, as Internet Explorer continues its gradual drop in global market share.

As of the new year, Internet Explorer (in all iterations) fell under 40 percent for the first time ever, to 38.65 percent. Chrome increased 1.58 percentage points to 27.27 percent, overtaking Firefox at 25.27 percent.

Google saw, by far, the strongest growth in 2011, jumping a full 11 percentage points. Firefox completely stalled out after years of taking share from Microsoft, and Microsoft has just been slowly falling every years since 2003 when it hit a peak 93 percent share. For the year, Firefox lost 5.41 percentage points.

Safari, thanks to strong Mac sales, moved to over 6 percent share, its highest ever.

There is very little that can stop Mozilla's woes at this point, even though the company just received almost $1 billion (over three years) from Google to have the company's search engine remain the default option on all new downloads. The move is seen as a way for Google to avoid anti-trust issues in the future when Chrome eventually moves to majority market share.

Microsoft, which has greatly improved its browser over the past few years, is planning to use Windows 8 and Internet Explorer 10 to stop its declining market share into the future.