Last week, AMD executives laid out a plan for developing a new SOC (System On a Chip) architecture for all their processors.

CEO Rory Read, whose tenure at AMD began just five months ago, kicked off the presentations at AMD Financial Analyst Day by talking about the impact of ARM processors, mobile devices, and cloud services on the computing landscape, as well as the importance of relationships with OEMs.

He sees a situation similar to what happened in the 1980s, when mainframe dominance was first challenged by personal microcomputers. As an IBM employee for 23 years, starting in 1983, Read a had an insider's view of that transition. He believes the current environment is creating opportunities to compete with Intel in the same way early PC makers took on IBM.

He described how he sees AMD transitioning from the old PC oriented CPU paradigm, where speed and complexity were king, to what he called "an SOC kind of strategy." Rather than using the latest technology and running the risk of missed deadlines or disappointing products, he wants to focus on producing a single chip package with the features people already want and need.

We see the new ecosystems emerging - the days of that proprietary control point dominating 95 or 98 percent of a particular set of clients - that's beginning to change. That day is beginning to end. A new wave is beginning to emerge. Who thought two years ago we'd talk about Win 8 on ARM devices. It's going to happen this year. Those devices and the way devices are used, from tablets to ultrathins, all the way through. This is going to occur, this convergence.

We know that the cloud's going to drive graphic and the way data is viewed at the customer and the converged device level. We know with that IP today, what fifty percent of the traffic on the Internet is graphics or video based. Within two, two and a half, three years max it'll be eighty, eighty five percent. And with the cloud driving it, it's only inevitable. And if it's gonna occur in the emerging markets, it's gonna be in the entry and mainstream price points. That's exactly where we play.

Chief Technical Officer Mark Papermaster fleshed out the picture a little, starting with how their Fusion APUs (Accelerated Processing Units), which were introduced last year, fit into the company's new vision. Fusion APUs which add a GPU directly to the CPU die. Even though this falls short of a true SOC, it is clearly a step in that direction. He described it as the first of several stages in the development of HSA, which stands for Heterogeneous Systems Architecture.

Eventually they plan to expand far beyond simple CPU/GPU integration. Papermaster said AMD wants to HSA to be an open industry standard for SOC platforms and components. They have already developed some initial specifications and shared them with partners for review. They will be unveiled publicly in June at the AMD Fusion Developer Summit.

Also some time this year, they will be establishing a HSA consortium which they hope will attract both hardware manufacturers and OS developers. The idea is to develop a single underlying framework for programmers to work with hardware. In theory this would help avoid situations like Linux users ran into getting many motherboard components to work when they were designed specifically for Windows.

At the same time, AMD is already moving forward with some proposed GPU-related HSA features. This year and next they will be introducing more advanced Fusion APUs which share RAM between the CPU and GPU more efficiently. In 2014 they plan to be implementing actual HSA standards. 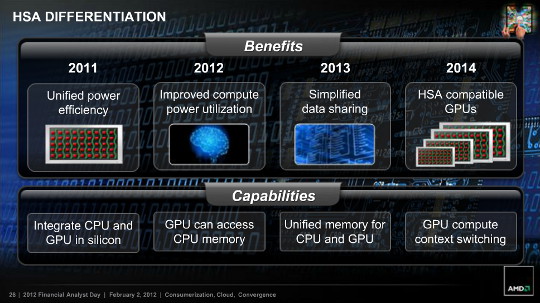 If AMD's HSA initiative is successful, that's when their SOC strategy would kick in. It would allow them to integrate not just their own technology, like ATI GPUs, but also a selection of third party components into their processors. While technically they could do that already, in theory HSA would make the process smoother and cheaper.

What may be the most interesting aspect of this is perhaps even the CPU core could come from outside AMD. While he didn't talk about it in his presentation, Papermaster was asked later whether AMD would consider basing a new design on ARM cores. Based on his earlier description, HSA should make swapping out processor cores relatively simple and straight forward. He told Wired:


If our customers need a different instruction set architecture, we can drop that in and still leverage all the rest of our differentiation. That graphics experience, all our multimedia, can certainly be leveraged going forward.

Considering the remarkable adoption rate of ARM powered devices, even in the best case scenario HSA might arrive too late to make x86 a tablet contender. Not to mention the competition from Intel's revamped Atom processors which are also now a SOC option. If successful, Atom could derail HSA altogether and give Intel a two year head start in the mobile market.

Of course, there may be a simpler explanation. At several points in his presentation, Rory Read referred to "proprietary control points," which is really just a different way of describing something we seem to talk about several times a week with respect to record labels, movie studios, or Sony's latest quarterly loss. Like so many of the most successful companies, AMD and Intel haven't needed to compete in the past because you couldn't escape the PC or it's mandatory x86 CPU.

Read appears to have taken the harsh lessons from his early days at IBM to heart. He started working there during a period of upheaval after decades of dominating the computer industry. Despite employing arguably the largest and most skilled group of computer experts in the world at that time, an insular work environment combined with too much emphasis on rules and procedures, plus decades without a serious competitor, left IBM unprepared to take on a company like Apple who relied on instinct, innovation, and pragmatism.

Is the age of x86 over?
Like IBM's mainframes in the 1970s, as recently as five years ago the x86 CPU had no competition of any consequence in mainstream computing. Although the men who would go on to found the two companies who make most of these processors were instrumental in developing the integrated circuits used today, ultimately it was IBM's shortcomings which set them up to become the giants they are today.

The success of the x86 family resulted from IBM's inability to develop the PC quickly enough using their own components. Instead they were forced to find contractors to supply everything. For the CPU they chose a variant of Intel's 8086. In order to fulfill a standard IBM requirement that there must be at least two sources for any third party component, Intel licensed AMD to produce the 8088.

Since then many new generations of x86 CPUs have been introduced, along with the more recent 64 bit variant. Although they were a relatively minor player in the market for most of that time, in 1998 AMD became serious competition for Intel with the introduction of the K6-2. While this was good for x86 development, just like IBM with their mainframes, Intel and AMD were so sure of x86's importance, they failed to see the competition (ARM) changing the computing landscape all around them.

In 2007 Apple once again ignored the rules no one else dared question and the era of low power mobile computing began. While Intel and AMD focused solely on their own competition, bouyed by the belief x86 was an unstoppable force, companies like Qualcomm, Texas Instruments, nVidia, and Samsung were making ARM the dominant mobile processor architecture on the planet.

Shortly after the original iPad was released in 2010, any remaining questions about whether an ARM processor could power a "real computer" were answered. By February of 2011 Intel got serious about low power mobile computing and announced their next Atom chip would finally use a SOC architecture and smaller transistors to make it less power hungry. However, AMD does not have Intel's resources or a mobile chip which is close to being competitive with ARM.

If AMD is going to survive, they can't rely on consumers needing x86, and they don't have the resources of an Intel to make changes in their own time. What they need to do, and what Rory Read seems to have committed to, is streamlining chip production and prepare themselves to go wherever the market dictates. In a world where corporate executives seem to pride themselves on ignoring lessons from the past, Rory Read's leadership may be exactly what AMD needs.