Online retailer to penalize users who use Internet Explorer 7 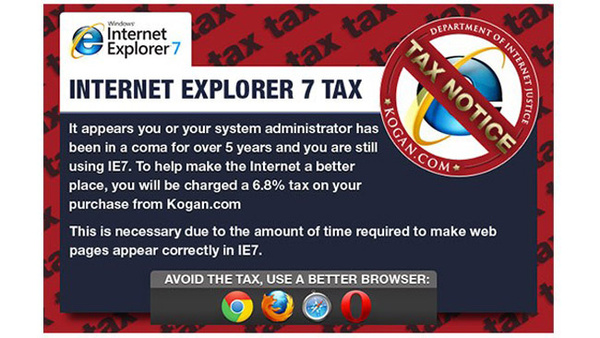 The online electronics retailer Kogan has announced on its site today that it will be charging any customer using the site through Internet Explorer 7 with a 6.8 percent tax on their purchase.

Founder Ruslan Kogan says the tax is because he is forced to spend too much energy (and money) on making the site usable for IE7 users:

"Internet Explorer 7 has long since passed its use-by date. It's a constant source of frustration for our web guys and we're sick of burning cash on a browser that hit the market nearly six years ago. It goes against everything Kogan stands for."

In order to remove the penalty, users can switch to any other modern browser, including IE 8 or later, Chrome, Opera, Firefox or Safari.