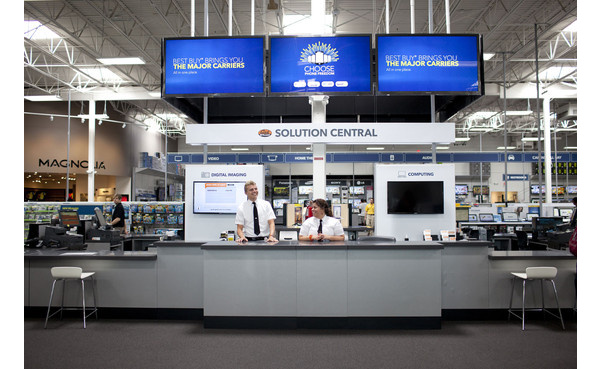 According to new reports, Best Buy is looking to convert some of their stores in Apple Store look-a-likes.

Best Buy is looking to change 60 of their 1100 branches in the United States into outlets that look and feel like the popular Apple retail shops.

Dubbed 'Best Buy 2.0,' the new converted stores will have a large help desk similar to the Genius Bar, focus mainly on mobile devices like tablets/smartphones/e-readers and let shoppers pay from multiple locations around the store.

Best Buy's version of the Genius Bar is called 'Solution Central' and will be occupied by Geek Squad. The desk will have chairs for customers, allowing for a better connection between employees and customers.

Finally, the stores will be 20 percent smaller than the average size of a Best Buy location, and will move away from the standard yellow and blue color scheme to a blue and white one.