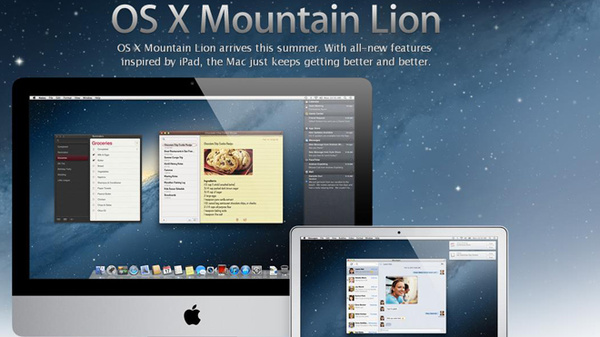 The update tightly integrates with cloud storage solutions for Mac users, as well as steal multiple features from iOS, the company's mobile operating system. Among the new features is an OS-based integration with social networking giant Facebook, microblogging giant Twitter and other services like Flickr for sharing pictures. Additionally, "Messages" will replace the former iChat system, allowing you to send instant messages to any Apple user, whether they are using an iOS device or a Mac. Finally, the update will also bring basic dictation to your Mac, allowing you to talk into the mic and have it converted to text.

Although those features are notable, they certainly aren't mind-blowing, and Apple seems to have admitted this by making the update just $20. It is also quite simple to upgrade, as long as you have the right current operating system.

You head into the Mac App Store, buy the OS as if it was an app, let it install in the background and then finally reboot.

Adds Phillip Schiller, Apple VP of marketing: "Just a year after the incredibly successful introduction of Lion, customers have downloaded Mountain Lion over three million times in just four days, making it our most successful release ever."