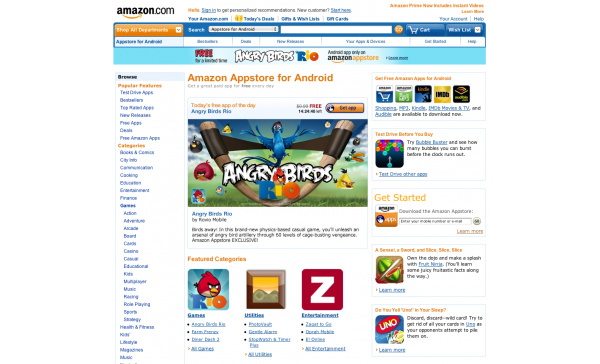 Amazon has expanded the Appstore for Android apps to five European nations.

The Appstore is now live in Germany, the UK, France, Spain and Italy.

Each version of the store will offer free and paid Android apps for tablets and smartphones, exactly the same as the North American version.

As with the U.S. version, Amazon will offer the Free App of the Day, starting with Angry Birds premium and Plants v. Zombies. The store will have its own Android app, as well.

"Customers in the US have purchased millions of apps, games, in-app items and subscriptions since the store launched last year, and we've received great feedback about discovery features like Free App of the Day," added Amazon's VP of Amazon Appstore Jim Adkins. "Amazon has spent years developing innovative features that help customers find and discover the products that are right for them and have applied that know-how to the Amazon Appstore. We're delighted to extend that experience to our European customers."