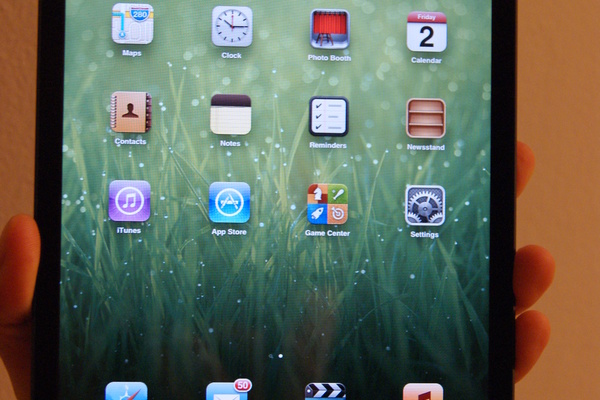 After months of rumors and leaks, Apple took the wrapping paper off its iPad Mini tablet, a smaller variant of its popular market leading tablet.

In an effort to compete better with smaller, cheaper (yet powerful) tablets, such as the Nexus 7 and the Kindle Fire HD, the iPad Mini has a 7.9-inch display and features specs mixed between 2011's iPad 2 and early 2012's third-generation iPad.

The tablet is more expensive than its rivals by a long shot, but it also features Apple's extensive ecosystem and the iPad design, which has been second-to-none since the first generation's launch in 2010.

In this review, we will discover if Apple's latest is worth the hefty price tag. 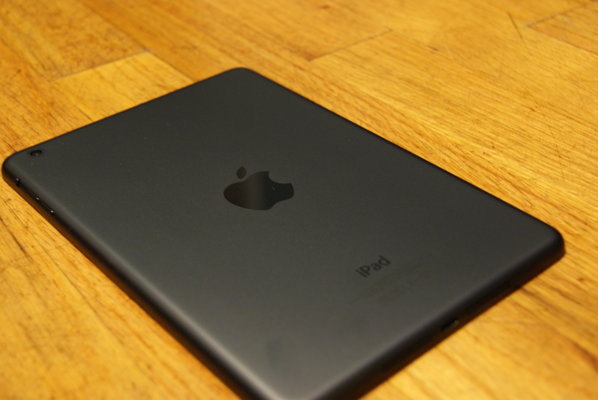 I will start this off bluntly. The iPad Mini has easily the best design of any tablet in its size class, and it's not even close.

The build quality is fantastic. There is no part of the tablet that feels cheap, and the device is extremely sleek and attractive. While I liked the design of the Nexus 7, this is no competition. Best of all, the tablet feels solid enough that you get a sense of where your hard earned money went. Most rivals in the class feature boring black slabs with usually too much bezel. There is no plastic or rubber here, just a great looking silver metal casing.

Nothing else has really changed for the iPad, with the home button, power, volume rocker and rotation lock toggle still in the same place. The company did move the speakers, however, to the bottom of the tablet from its normal place on the back. Additionally, as they have done with all their new tablets, the Mini has a Lightning port, for charging and other connectivity. The Lightning is easily the most annoying feature of the Mini (and new iDevices), as it renders all previous docking/cable solutions useless, forcing iPad owners to purchase all new proprietary accessories, at a premium price. There are also no HDMI or MicroUSB ports, which are standard on most other tablets. 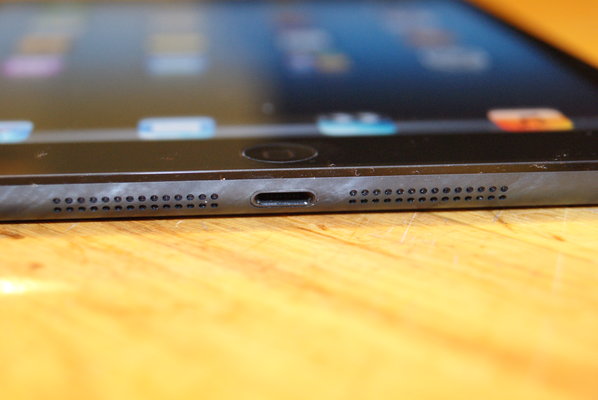 The tablet is light, extremely light, even though it is larger than its rivals. The Mini has a height of 7.87 inches, a width of 5.3 inches and is just .28 inches thick (compared to 0.41 for the Nexus and 0.4 for the KFHD). Weight clocked in at 0.68 pounds, lighter than the Nexus at 0.75 pounds and the Kindle Fire HD at 0.87 pounds. While the numbers may seem insignificant, I could certainly feel the difference. The Mini just felt lighter and it was certainly thinner.

On the downside, I found ergonomics to be slightly "off" for the Mini. Holding the iPad Mini in one hand for an extended period hurt my hand webbing and grabbing the tablet a bit more securely led to my thumb being placed on more of the screen than I would prefer. These are minor annoyances however, as I felt the Mini was perfect for holding with two hands and especially typing, much more so than the N7 and KFHD.

Under the hood, the device is plenty powerful for everyday use, although it does not compare to the Nexus 7 on the high end.

The Mini is powered by an Apple A5 processor, clocked at 1GHz, with 512 MB RAM. The Nexus has a quad-core, 1.3 GHz Nvidia Tegra 3, with 1GB RAM while the Kindle Fire HD has 1GB RAM also along with a dual-core TI OMAP 4 processor. The Nexus flew with its processor combined with Jelly Bean while the Fire sputtered a bit. Even though it's a dual-core in the iPad Mini, there was little drag on performance, although it would be great to try this review again with an A6-packing model of the tablet with more RAM. Apple also touts dual 802.11n frequencies; 5GHz and 2.4GHz, which is the same as the Kindle Fire HD but honestly unnoticeable for the average consumer. 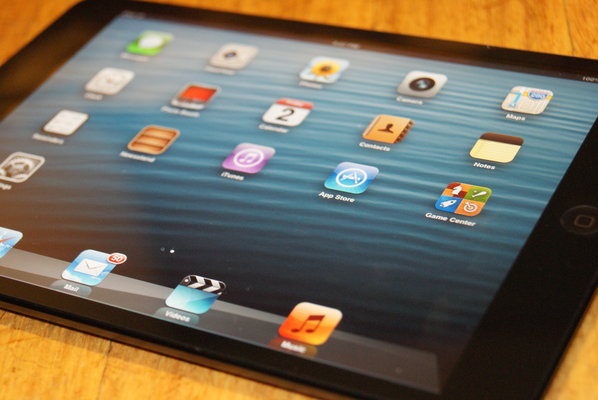 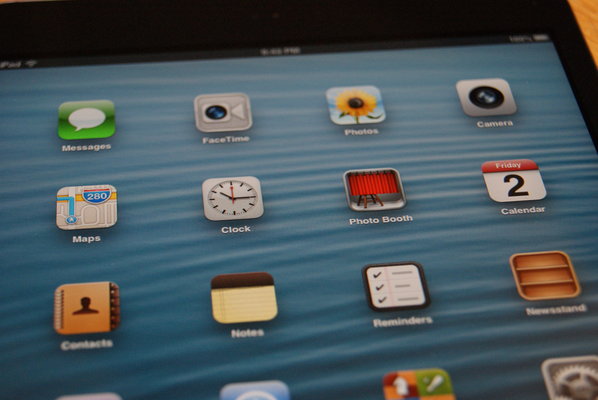 The display is where, surprisingly, Apple falters a bit.

Featuring an IPS LCD screen at 7.9-inches (much larger than the competition), Apple stuck with a resolution of just 1024x768 and a ppi of 163, which is lower than the competition and well below the Retina Display of its older brothers. Both Amazon and Google's tablets have 216 ppi and 1280x800 resolution and it's somewhat noticeable. You can see the pixels more so than on its rivals, and certainly much less so than on the third and fourth generation iPads.

Moving away from that, the colors are fantastic on the Mini, as are the blacks, but they are not as vibrant as the Kindle or the Nexus. A clear loss for Apple here, although the Mini's display was nowhere near "bad."


The iPad Mini performed admirably, and that seems mainly due to the efficiency of iOS 6 with Apple's own chipset. There was the occasional minor lag, but performance was more stable than the Kindle Fire. The Nexus was markedly faster, at least with multitasking and especially with app opening. The more powerful specs of the Nexus come into play here.. I believe more importantly is the streamlining of the operating system, which Apple has been perfecting. Google has been getting there, as well, with Jelly Bean being easily the most efficient OS the company has put out.

Battery life was great. With normal usage, including Twitter, videos, Web browsing, some app downloading and music, I managed to get well over 9 hours. Zero complaints. 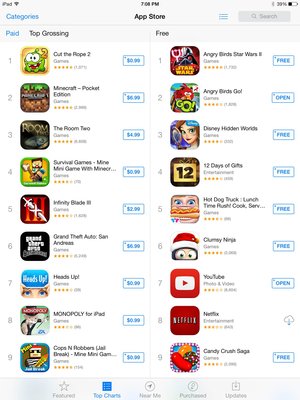 Apple added two cameras for the Mini, a front-facing 1.2MP camera and a 5MP rear camera with autofocus. The front camera worked very well for FaceTime and the rear camera took very decent pictures for a feature that honestly will likely not get used too much. As I have stated before, taking pictures with a tablet is awkward, but much less so with a smaller tablet than a regular iPad or other full-sized tablets. 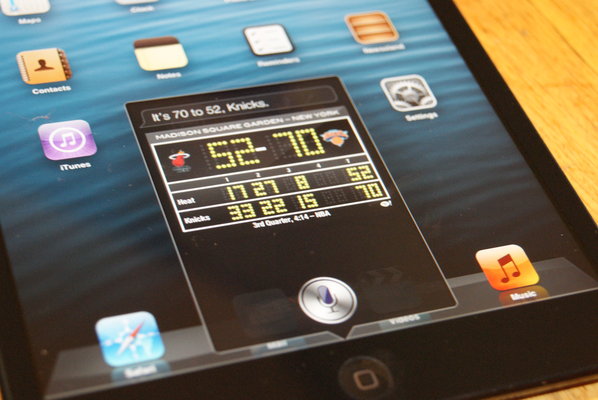 Anyone who has used an Apple device before knows it features the easiest to use ecosystem, although it's rivals are slowly but surely joining its ranks. iOS 6 has its well reported bugs, as does Apple's new Maps app, but there was little reason to fret. Siri remains hit-or-miss (more miss), but it is a great feature when it works and for tasks that it should excel in, it does.

Apple's app store has 700,000 apps (about 699,900 more than anyone needs) and the same amount as Google's Play Store. The app store is full of great apps designed for iOS, especially in tablet size, and they look fine on the Mini, despite its strange resolution.

iTunes has the largest collection of media, and iCloud, Newstand, the Game Center and all other Apple based applications all work great together as you would expect them to. That being said, using an Apple device pretty much means you are trapped in the Apple ecosystem, for life. You will need iTunes, whether you like it or not. While this does not affect my rating, I myself prefer the Google ecosystem, which I have been using for years and have all improved significantly over the years to the point that they are now parts of my life I probably could not live with out. iTunes and iCloud? I could definitely live without them. 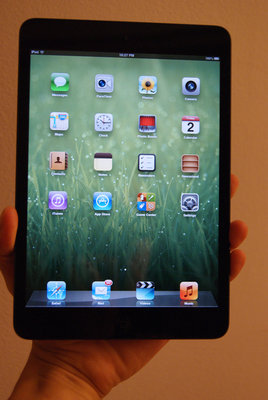 The iPad Mini is a great tablet. The design and build quality steal the show here and almost make you overlook the price. Almost. At a $329 base price, the iPad Mini is expensive, especially when compared to the other top performers in the 7-8-inch market which start as low as $159. The new 32GB Nexus 7 with HSPA+ connectivity costs $299, while featuring more powerful specs, a better display and a pure Google Jelly Bean experience to go with the ability to access Internet on the go.

Additionally, Apple has been reducing the price of the iPad 2 and even the third-generation device from earlier this year to make way for the new A6X-powered model, making previous models cheaper than consumers are used to.

If you love the Apple experience, I have very little complaints with the iPad Mini, mainly thanks to its look and screen size. The full-sized iPads never made me want to take them anywhere (it could be just me), but I found myself carrying the Mini everywhere, not just around the house.

The iPad Mini is hard to endorse because of its hefty price (comparatively), but also impossible to not endorse due to the fact that, well, it's a fantastic tablet.