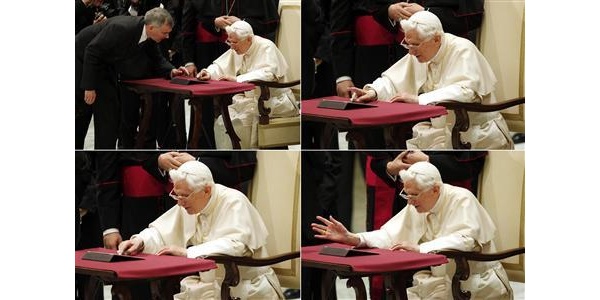 The Pope has tweeted his first Tweet today, a couple of weeks after signing up for the microblogging platform.

Vatican televisions recorded the situation, with the Pope tweeting from a tablet.

On his first attempt, Benedict apparently hit the send button too hard and the tweet didn't send so Archbishop Claudio Maria Celli of the Vatican's communications department helped him on the second try.

Reads the Tweet: "Dear friends, I am pleased to get in touch with you through Twitter. Thank you for your generous response. I bless all of you from my heart."

Since signing up, the Pope has just under 1 million followers. The Pope has sent 6 tweets since.

Offer everything you do to the Lord, ask his help in all the circumstances of daily life and remember that he is always beside you