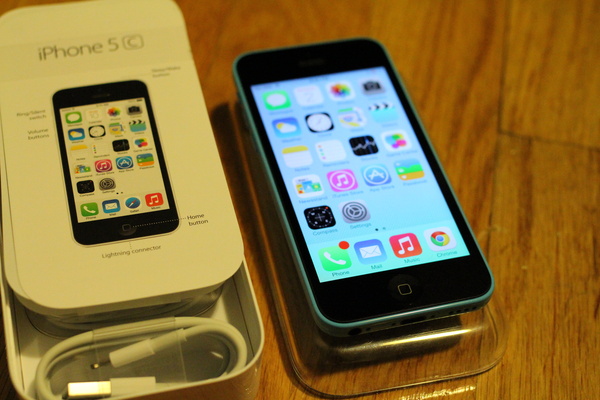 The 5S would be the new flagship device while the iPhone 5C would take the place of the iPhone 5 at a lower price point. The "C" in 5C stands for "communication" but it might as well stand for color as the device was made to stand out with a new lineup of colorful models.

Apple has used their marketing muscle (and let's face it, genius) in creating the iPhone 5C, which is not a new device at all, but it is certainly made to look and feel like one. When launched with the updated iOS 7, which in itself is more colorful and refined, Apple does a fine job of making a repackaged iPhone 5 seem like a brand new phone.

On to the phone itself, continue with our review to see if the device is worth your $99 (on contract), or $550 (off contract). 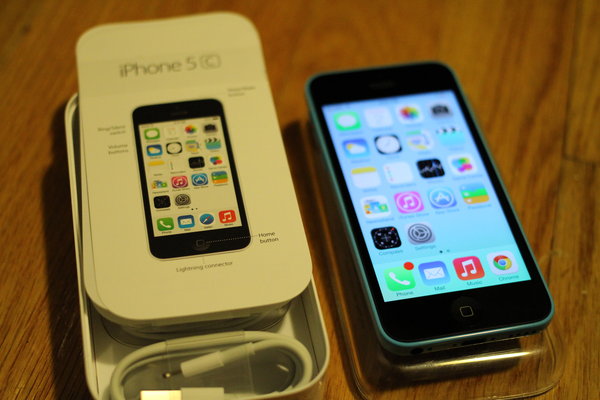 As previously stated, the iPhone 5C is a repackaged iPhone 5. The display is a 4-inch widescreen Multi-Touch with 1136 x 640 resolution and 326 ppi, better known as "Retina." Under the hood is last year's A6 SoC, which is a 1.3 GHz custom Apple-designed ARMv7 dual-core CPU, which at this point seems quite old compared to the new 64-bit processing of the 5S.

On the design side, the 5C is all about the new colors. The device comes in pink, blue, green, white and yellow and they have been selling in that order. Around 40 percent of buyers are picking up the pink model (implying younger females, according to most reports) and another 30 percent are picking up the blue model. Yellow remains the outcast, with less than 5 percent consumers going for the colorway. The lineup of colors is reminiscent of what Nokia has been doing with their Lumia devices, and the company even took time to take a jab at Apple, claiming "imitation is the best form of flattery," via Twitter. 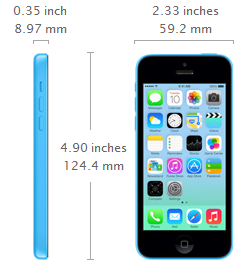 The new colors mark a new frontier for the iPhone, which has been available in only black and white since its launch. The iPhone 5S is also available in new colors, the more muted and professional "champagne" and "space grey." The colors are extended to the volume rocker and power buttons, which excellently frames the black bezels of the display.

Despite being plastic, the phone does not feel cheap like other plastic devices do, including the Samsung Galaxy S4. The device is light but still feels sturdy. Apple has never really failed on the design side, but the iPhone 5C is certainly not as elegant as the iPhone 5 or the new 5S.

As far as the specs go, they are outdated now but they are certainly not bad. Apple's custom chips always work to peak performance on their devices. On the design side, Apple needs to start going bigger than 4-inches for their displays, no matter how high quality the screens are. They are simply too small and it makes extended typing, movie viewing and reading more burdensome than they should be. This problem will likely be gone with next year's iPhone 6, but for now those are my thoughts on the hardware.

The display itself, despite its small size, is excellent. Color replication is excellent, the Retina resolution and ppi are great as usual and saturation and brightness are second to none. I have no complaints with the display, for what it is.

For wired connectivity, the device uses the proprietary Lightning port and there is nothing else. There is no microSD slot, but Apple has been pushing its iCloud solution to those who would otherwise use a lot of internal storage. Everything else is standard, 802.11a/b/g/n Wi-Fi (802.11n 2.4GHz and 5GHz), Bluetooth 4.0, GPS, and LTE. 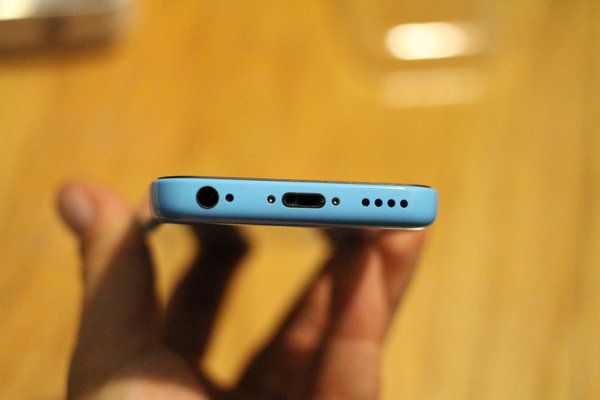 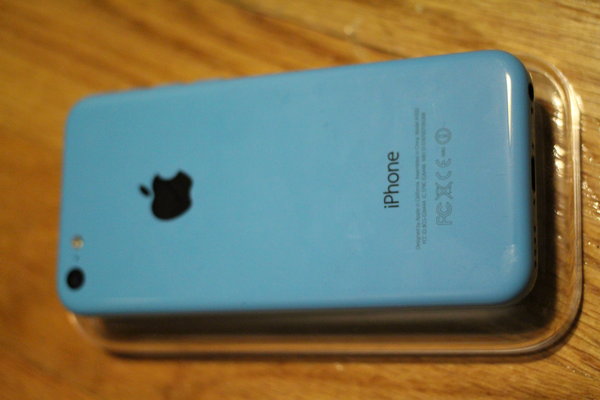 The FaceTime front-side camera has a 1.2MP sensor, and Apple has improved the low-light capabilities, which are noticeable. The camera allows for 720p recording and 480 x 368 resolution over Wi-Fi and data.

On the back is the same 8MP, ƒ/2.4 aperture camera from the iPhone 5, which remains one of the top three best phone cameras, behind (in popular opinion, the iPhone 5S and the Lumia 1020). The camera has a sapphire crystal lens cover, LED flash, a "five-element lens," face detection, autofocus, HDR, geotagging and other standard accessories. With iOS 7, the camera app is much more responsive, faster and even includes some faux-Instagram filters and the ability for easier panorama and "square photos" built for your favorite social network.

The cameras are great, and Apple remains a leader in this category although Nokia and Sony are not-so-subtly trying to take the crown. 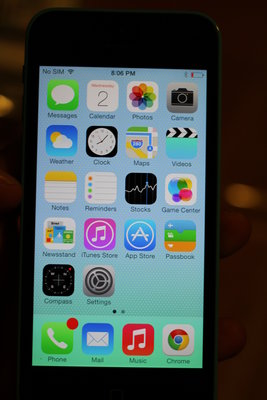 This should not come as a shock, but Apple's ecosystem is best in class, with Google a close second. The way the company has integrated movies, music, games, books, magazines, social networking, Airdrop their own Maps app and the new Passbook application is one of the main reasons Apple "fanboys" come back every year for the next device despite marginal improvements.

iOS 7 was a huge improvement for the operating system, which had become looking very dated in 2011 when Google unveiled Android 4.0 Ice Cream Sandwich. The new modern look is sleek, the animations and transparencies are nice, and overall the colors and apps just look better. The addition of the Control Center was a no brainer, as Google has included "Power Control" widgets for as long as I can remember. The Notification center is still a mess, but it is a vast improvement over iOS 6.

The Passcode lock screen is much improved, the general phone call screen (and Facetime) as well, are much improved, and aesthetically iOS 7 is very appealing. 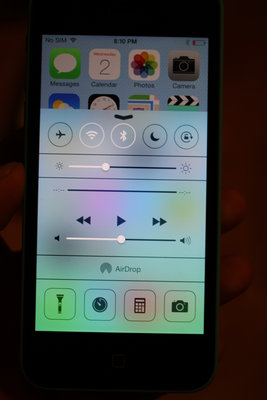 While I am praising iOS 7, keep in mind that the operating system has a lot of work to do in the coming weeks and month. It is buggy in many areas, can be laggy at times, some of the apps with old logos/designs look terrible, and the OS will lock up on you sometimes. I had to restart the phone once or twice to get Control Center capabilities back after looking like an idiot swiping upwards and getting nowhere. Being able to see what you are multitasking with a double tap is a huge improvement from past iOS versions, but like many of the other improvements, it is a copy from Android, and something that Android did better and has a head start on.

The bottom line is Apple has made a huge leap forward with iOS 7, but it needs work on the foundations rather than just on the looks and feel. 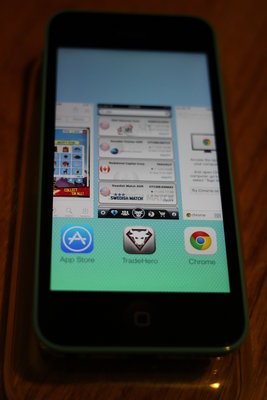 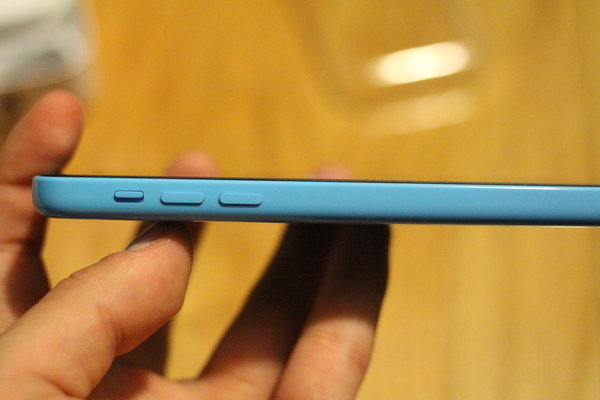 From a marketing standpoint, the iPhone 5C is genius. Apple has turned a year-old phone into something brand new, aimed at consumers that weren't previously iPhone owners but may have been considering making the jump. The colors appeal to a younger demographic, and the $99 price tag on contract should appeal to parents, as well.

The phone is very good overall, and if you are invested in Apple's ecosystem, it is hard to move on. It is a huge upgrade from the iPhone 4 and 4S, which still have a ton of owners and despite being plastic the phone is not "cheap" or cheap feeling by any stretch.

As an unlocked, off-contract device, the phone is expensive. Google will be unveiling a new Nexus device in the next month which will likely sell for $299-$399, a minimum $150 cheaper than the 5C sells for. The Nexus 5 will have a 5-inch display, Google's ecosystem and other streamlined hardware that will make performance impressive. Current devices like the Sony Z1 and HTC One have premium metal bodies, large screens and high-end specs and sell for $550-$600 unlocked. Even the 5S, which boasts large improvements across the board, sells for $650 unlocked. For most, the extra $100 will be worth it.

Apple has a winner in the iPhone 5C, even if it is a repackaged iPhone 5. The design is fun and the phone itself has strong qualities. At $99 it is a very decent deal.