T-Mobile has confirmed that it will be retiring all grandfathered service plans and moving customers to its new Uncarrier/Simple Choice plans, along with new rates.

"Maintaining thousands of rate plans is the norm in the industry, but we think it creates unnecessary complexity. Simple is better, which is why we're reducing the number of older plans in our systems. We're giving customers on these plans the opportunity to choose a plan that best meets their needs. For the vast majority, their plan will provide similar or better features at a comparable price."

Angry customers using plans from over five years ago have taken to forums to vent about the move, but the vast majority of customers will see little change to their current plans. In fact, T-Mobile has even discounted some plans for existing users, including one who posted the letter he received. (Below)

T-Mobile offers their Simple Choice Plan starting at $50 per month with unlimited voice, texting, international roaming and 500MB of 4G data (and throttled speeds after that). 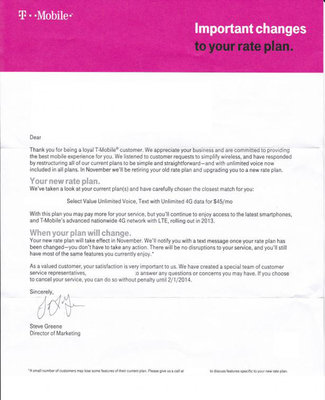