Hands-On Review: Does the Motorola Moto G give you your money's worth for $179? 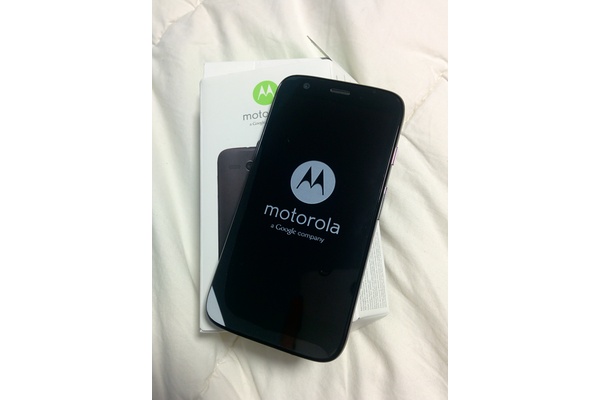 In November, Motorola Mobility took the wrapping off its Moto G device, an entry-level smartphone that the company hopes will help it dominate the low-cost market.

Google has priced the phone at $179 off-contract and unlocked, a new low for an Android device with such specs, and a clear way to distance the operating system from rival iPhone, which sells for $600 or more off-contract.

While the device does not offer the same specs as the top models in the market like the Nexus 5, Moto X, HTC One, Galaxy Note 3 or the iPhone 5S, it comes at a price lower than each of those cost even when taken with a two-year contract.

We will explore whether the Moto G offers the best Android 'bang for your buck' and whether or not it has a place among the market leaders. 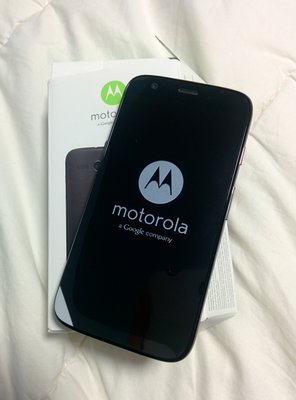 For those familiar with the Moto X, the Moto G is nearly identical in look and feel. The device has a curved rubber back, four rounded corners, large physical buttons and a plastic front with larger bezels.

Somewhat surprisingly, given it has just a 4.5-inch screen, is the fact that the phone is heavy, heavier than our recently reviewed Nexus 5, and somehow heavier than the Moto X, which also includes a larger display but was built in the same likeness. The side buttons, while satisfying to "click," protrude too far out and can be an annoyance when holding the phone for regular use.

Despite being heavy and made with plastic, the smartphone does not feel cheap at all, and actually seems premium when compared to existing Android devices that have fallen in this price range. The rubber, curved back is pleasing to the touch and overall the design is nicer than what was expected. Unfortunately, fingerprints and smudging are heavy with the Moto G, on both the front and back.

Another note on the design is the ability to swap back covers. While the Moto X allowed you to customize the back cover, trim of the phone and volume rocker colors, the Moto G only has the ability to switch the rubber cover for more colorful variants; and it isn't easy. Removing the back cover, especially the first time, is a task but adding colors does seem to be a welcome relief to the monotony of black on black colorways. 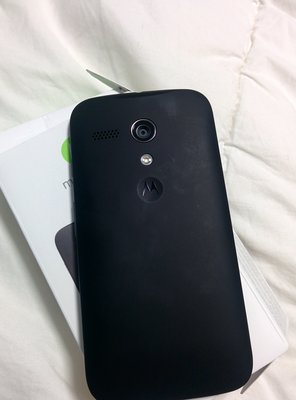 Under the hood, Motorola could not afford to use its custom Moto X X8 system-on-a-chip, so instead the Moto G uses a high mid-range 1.2GHz quad-core Snapdragon 400 and 1GB RAM. Internal storage has fallen to 8GB (or 16GB if you pay up an extra $20) and there is no microSD slot, so it is clear that Google wants you to use cloud solutions for music and photos and videos when using the device. In fact, straight out of the box, the Moto G shows about 5.55GB available space, leaving very little space if you are an app collector or avid gamer.

Notably missing from the Moto G is LTE support. Because the phone is GSM-based, in the U.S. it will work with T-Mobile and AT&T from the majors. Both have LTE networks (AT&T's is more robust) and both feature fast HSPA+ networks, as well, which lessens the blow of no LTE. Around the globe this may be even less of a problem as LTE is not as widespread, and 3G/HSPA+ speeds can rival low-end LTE speeds in many areas. 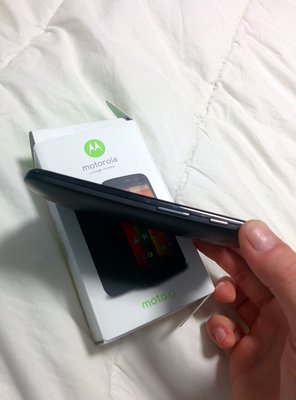 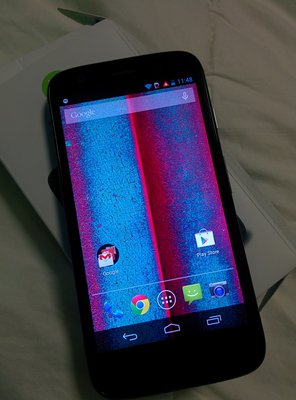 The Moto G features a 4.5-inch 720p LCD which is excellent for its size, and certainly for its price. The display is bright, the colors are accurate and well saturated and viewing angles are better than most displays I've seen, even on high-end models.

In the $100-$200 off-contract price range, 800 x 480 resolution is the norm so a 720p display, and a nice one at that, is an excellent surprise. The touchscreen itself saw no lag and was very responsive. I have no real complaints with the Moto G's display except that around the edges of the fonts the letters appear slightly blurry/pixelated but this could be coming from using a 1080p phone on a regular basis.

Performance for the phone was snappy, as well. The quad-core processor easily handled multitasking and other tasks without lag. Transitions were smooth, as was app opening.

Battery life was also much better than expected, as the 2000mAh battery got me through the entire work day with moderate use and at least 30 percent battery life to spare. This includes website browsing, periodic Twitter widget streaming, auto sync, high brightness and 3G always on.

Although not explicitly stated by Motorola, the Moto G should see significant improvements in the coming weeks when it receives Android 4.4 KitKat. The operating system was made to increase the functionality of phones with lesser specs, and the minimum requirement is 512MB RAM compared to 1GB for its predecessor (and current Moto G OS), Android 4.3.1 Jelly Bean. We will update this review with the launch of Android 4.4, which is expected to make transitions even smoother and increase the efficiency of the quad-core processor. 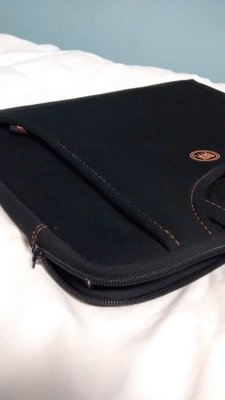 Although I was not expecting much, the cameras were still a disappointment. The 5MP shooter consistently took out of focus shots, many of which included tons of artifacts and noise. It was very hard to take a good shot, even in the best of lighting conditions, which means, as you can expect, that low light performance was poor. It is clear that Motorola had to cut some corners to get the price so low, but it is most notable here with the camera.

Android phones are notorious for hit-and-miss cameras, even on high-end models, but there has been some great improvements in the past years. Unfortunately, the Moto G will not win you any photography awards but it "gets the job done" at its basics. 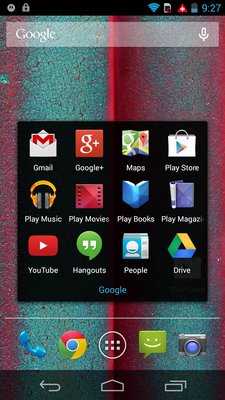 The Moto G ships with Android 4.3, but will be updated to Android 4.4 in the very near future. The operating system is nearly stock, but with some added Motorola apps, all of which are actually quite helpful and I do not consider to be "bloat" in anyway.

One example, Moto Migrate, allows you to transfer all of your existing Android settings, photos, videos, and music from your old phone to the G with a few clicks. Another app, 'Assist' learns your routine and helps you automate tasks intelligently, such as setting the phone to silent and turning auto-replies on when you're at a daily meeting or setting the phone to silent during your regular sleeping hours. When driving, the phone will go to hands-free mode. Additionally, Motorola has built-in security features such as remote wipe that can be set up right at launch.

An FM Radio app is built in, and must be used with headphones, and all other Google apps are installed, including QuickOffice for word processing.

The Google ecosystem is always improving and rivals iOS to the point where it's just a matter of preference now. The Moto G integrates the Google lifestyle as well as any other new device. 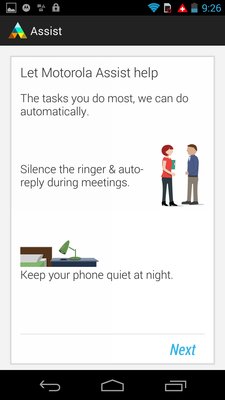 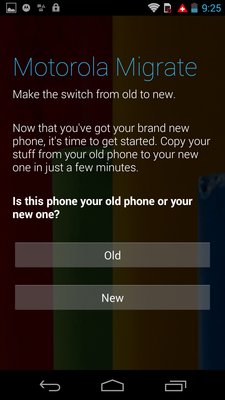 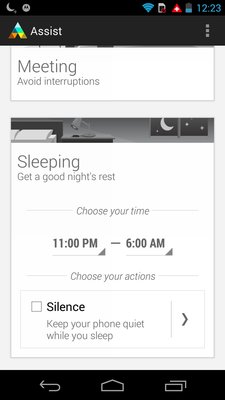 With a nearly stock version of Android, the Moto G also integrates the Google lifestyle extremely well and strong performance that is efficient enough to keep the battery life excellent are huge pluses. The cameras were a disappointment, but honestly that can be overlooked when you just paid $179 for an unlocked, off-contract smartphone that would have been in the upper echelons just a year ago.

If you are on a carrier where it pays to buy your phones upfront in exchange for much smaller monthly payments, the Moto G is an ideal way to get started on Android. This device does have competition when you take into account the Nokia Lumia 520, which retails nowadays for around $80 and has gained heavy traction around the world for a strong Windows Phone experience at such a cheap price, but in the Android camp it is a no-contest.