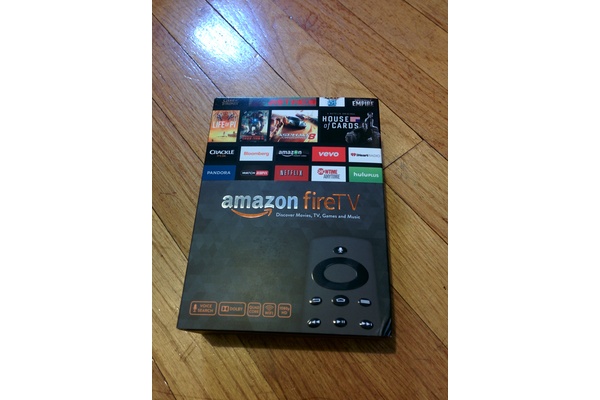 Earlier this week, Amazon broke its silence on its long-awaited set-top box: the Fire TV.

The device, which rivals a growing amount of consumer set-tops and HDMI dongles including those from Apple, Roku, WD and Google, is another gateway to Amazon's ever growing ecosystem of applications, games, movies, TV and cloud storage.

In differentiating itself from other similar devices, Amazon has promised better gaming, better voice search and of course, the easiest access to your Amazon life. It succeeds in may of its endeavors, but the biggest question remains whether the device is worth shelling out $99 for a set-top so similar to what you may already own.

Design, Remote and Set Up 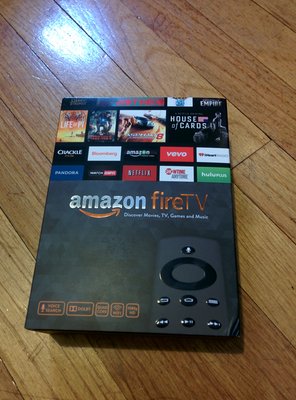 The Fire TV is as plain as you can get, but it remains sleek, at least compared to rival boxes. The tiny black box is thin, perfectly square and does a good job of hiding its port on the back. There is a small LED light on the front that lets you know the box is turned on, but other than that there is nothing else to speak of. It blends perfectly into your entertainment center, or will subtly complement your TV.

As for the ports, there is the power jack, one HDMI, Optical Audio, 10/100 ethernet and one USB 20 drive. It is clear that Amazon went as cheap as they possibly could here, but in reality, they want everyone to just use the device for wireless streaming.

Under the hood, the Fire TV is very powerful little device. Amazon's set-top is powered by a 1.7GHz quad-core Snapdragon processor with an Adreno 320 GPU and 2GB RAM. The device has 8GB internal storage, a dual-band, dual-antenna Wi-Fi (MIMO) (802.11a/b/g/n) and Bluetooth 4.0.

Setting up the device is just as easy as you would expect it to be, and on par with the Roku line. You plug in the set-top to the wall, plug in the HDMI and run through inputting your Wi-Fi password (or skip that if you are using ethernet). Annoyingly, you have to get through a non-skippable 2:30 video tutorial on how to use the basics of the box before you can get to your homepage. If you bought through Amazon, your Amazon account (and Prime if you are a subscriber) are already pre-loaded and linked to the account, which is a great touch, and anything you've saved to Amazon Cloud is already available, as well. Anything you may have purchased through the Amazon Video store is already available, as well.

The included remote is a thin, matte finish remote with a full circle D-pad, "ok," menu, home, back and play/fast forward/rewind buttons. At the top of the remote is the voice search button, which is where the device really shines, but there is more to that later. Amazon's remote is sleek, as well, and otherwise straightforward.

Overall, the design is plain but sleek and the setup is as easy as can be. Amazon did a good job of making the box accessible to those not in the tech world, just like Apple excels at doing. 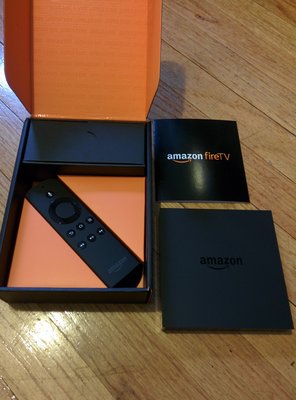 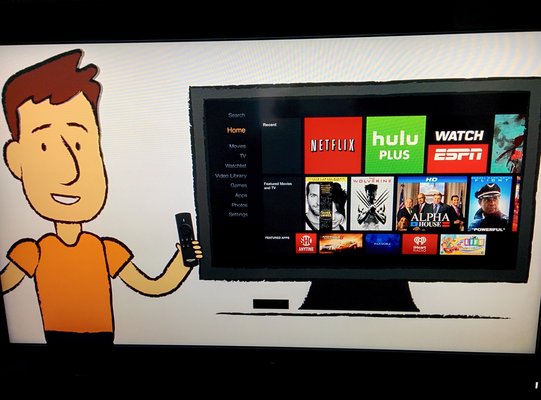 There is not much to the Fire TV except for its user interface. The UI should be very familiar to anyone who has used a Kindle Fire tablet. It has a dark background (unlike the Roku's very colorful home screens), a basic menu on the left hand side, and all the content on the right side.

The grid structure is very simple but also elegant, and it works exactly how you would expect it to, making it easy to find content easily. The menu categories are split into movies, TV, apps, games, your cloud content and a general search. You can also create watchlists and queues.

Most of the major apps are available as of launch, including Netflix, Hulu Plus, Plex, Crackle and ESPN but some notable missing apps are Vudu, HBO Go and Aereo, each of which in itself will be dealbreakers to many customers. Strangely, there are HBO shows plastered all over the cover of the Fire TV's box, which makes no sense if the device was not going to launch with access to them. Each one of the apps work almost exactly like their counterparts do on Roku, WD, Apple, Chromecast, etc. 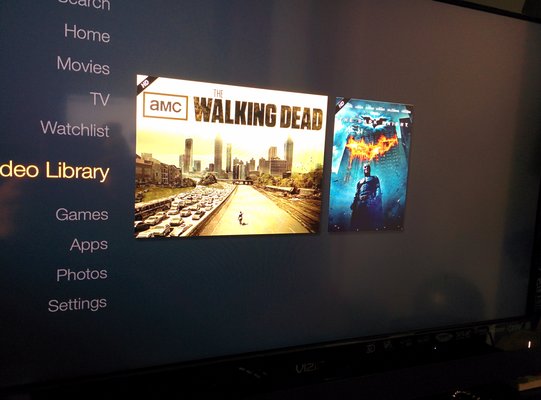 If you are a big time Amazon user, you will probably be in love with the set-top as its access to Amazon services and content are fantastic. Amazon's own apps work with no loading times, as it appears that the set-top does a lot of processing in the background when you aren't doing anything to make sure what you are watching next plays without issue. Finding your own cloud content is easy, and watching photos (in slideshow) is extremely easy.

Amazon has included its WhisperSync tech into the box, as well, meaning if you start watching a movie on your PC or tablet, it will sync instantly and you can continue right where you left off on your TV. If you are watching your content from Amazon, the "Recent" feed on the homepage is excellent and Amazon also does a great job of predicting what you want to watch next. However, if you are watching content through any app that isn't built by Amazon, you lose a lot of those features.

The interface, in general is great and preferable to Roku's and Apple's. Everything loads quickly and I have yet to have any lag. 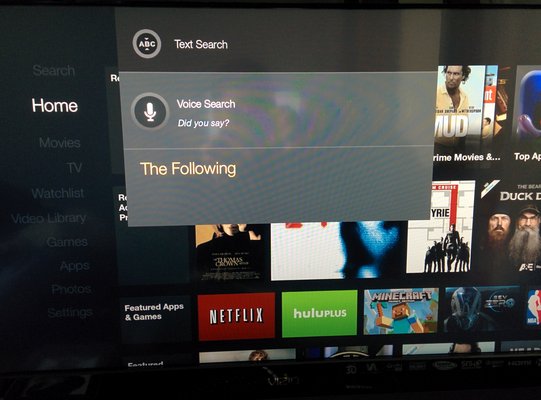 Voice search is one of the killer features for the Amazon Fire TV. The aforementioned remote has a universal voice search that makes searching for content much easier than other set-tops, which include typing in movie titles, or TV shows with a slow virtual input.

While the voice search is a killer feature, it only works for Amazon content and Hulu, which is nonsense. Pull up the Netflix app and you can't search within the app, you have to start typing again. Amazon says it will integrate more services into the universal search in the future, but that will come from the app makers. In other words, if the Fire TV is not that popular, there is little chance a real universal search is coming. This sucks.

Amazon's own product page claims the Fire TV has support for H.263, H.264, MPEG4-SP and VC1 video, AAC, AC-3, E-AC-3, HE-A, PCM and MP3 audio as well as JPG, PNG photos. This is deceiving. While the box will play such content from your Amazon cloud storage, you cannot play or transfer any content from external drives like hard drives or flash drives. This is a huge step back from the Roku, which allows you to play your own content from a USB 3.0 drive in MKV and other popular formats. Chatting with an Amazon representative, it does not look like that support is coming, making the USB drive on the back useless, like the USB drive on many TVs. Other devices, like the WD Live, can play nearly all types of content, and some even include internal storage making the device into mini-HTPCs, but the Fire TV does not and instead goes the path of the Apple TV, PS4 and Xbox One, where streaming is priority.

While the Fire TV does not break too much new ground with its streaming capabilities, it has taken gaming to a new level for set-top boxes. The box in of itself is a mini-console, not one that is meant to compete with the PlayStation 4 or Xbox One for hardcore gamers, but one that could get you to play games on your TV rather than on your phone as a casual gamer.

The company sells an optional Bluetooth controller that looks just like a standard Xbox controller with some extras. Outside of the standard ABXY, triggers and analog sticks, the company has also added a home button, and media playback buttons, as well.

Beating the Roku and Apple TV significantly in its gaming capabilities, Amazon offers popular shooter games that look great, even on the large screen. The company has even used its own studio to start developing its own game, starting with the sci-fi shooter Sev Zero. Other games popular to Android and iOS users include Badlands, Asphalt 8 and classic games such as Sonic and more. If anyone was still considering the Ouya or similar devices, the Fire TV has made those boxes dead on arrival. The Roku, for example, offers very basic gaming like Angry Birds, which is tough to control with the basic controller. Amazon says there are over 180 games already available, with an average selling price of just $1.85. This is fantastic, and the library will continue to grow.

Also strangely, Amazon has a coin system that you can use instead of real money, but I could not find a reason to do so. Even Microsoft killed off their oft-criticized virtual currency with the launch of the Xbox One.

Amazon has hit a few sweet spots with the Fire TV and it will be no doubt popular with Amazon faithful. The box provides a powerful punch for such a tiny device, and its quad-core processor should be relevant at least for the next year. The "universal" voice search works great for it can search, and is a huge step up from previous attempts and certainly from typing everything with a controller d-pad. Gaming is a huge step up from current set-tops, as well, and could be the real true killer feature that the box offers. Amazon has set the bar for gaming, and others will have to play catchup. Performance is fast, the interface is simple but elegant and I truly liked the design of the box itself. That being said, there were quite a bit of disappointments for me.

The Fire TV's universal search could be the killer feature the device needs to stand out but it only works for Amazon content and Hulu. This is a huge bummer. It could be improved in the future, but there is no time frame. Amazon launched the device without many popular apps, including leaving out HBO Go, an app whose shows are prominently on the box. Aereo and Vudu are another two apps that should not have been missing at launch. There is also no way to get live TV through your cable company. Not being able to play your own content off external drives is another deal breaker for me, although I am likely in a minority in that respect.

Amazon has made a device that could have been the best set-top on the market (by a long shot), but instead is just the best way to consumer Amazon content and play games. This is a shame. There is plenty of time to improve and update, but the competition is doing the same and in many ways has already surpassed the Fire TV in basic features.