Thanks to the end of quarter research report from Strategy Analytics, we have a better look into how the major operating systems are faring in the tablet market.

Overall, global shipments reached 57.6 million for the Q1, with Android and iOS dominating as expected. Android had a near 66 percent share, followed by iOS at 28 percent and Windows moving up slowly to a 6 percent share.

Apple iOS shipments (sell-in) were 16.4 million iPads in Q1 2014 which declined 16 percent annually, but Apple claimed that due to channel inventory changes which were reduced significantly from the same period last year, sell-through only declined 3 percent. We believe that the disappointing performance in the early part of the calendar year is because Apple has changed its product release cycle to the holiday timeframe. iOS will likely lose share over the next several months to refreshed Android products, but we believe Apple will win back meaningful high-end market share during the final months of the calendar year." 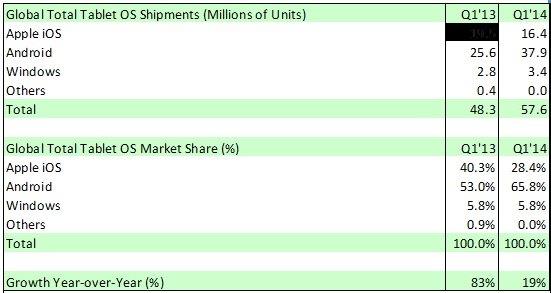