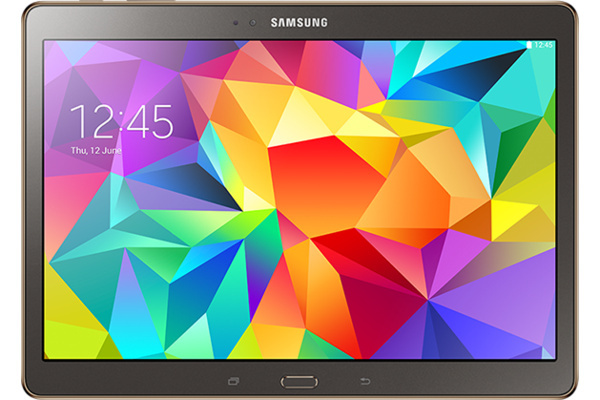 Ahead of its launch on July 10th, Samsung has released a quick hands-on with the new Galaxy Tab S and its new features.

The device looks similar to older Galaxy Tabs, but is once again lighter and thinner, at 6.6mm thick and 16 ounces for the larger model. It is thinner than the iPad Air, and is just as light, with just 2 grams separating the two devices.

Most notably, the devices have Super-AMOLED displays with a resolution of 2560 x 1600, run on Android 4.4.2 KitKat, and have Samsung's own suite of applications including Knox and embedded hardware security that should interest enterprise users.

Under the hood is a ridiculous Exynos 5 Octa chipset (a 1.9GHz quad-core chip, a 1.3GHz quad-core chip and 3GB of RAM), 16GB internal storage (microSD slot accepts 128GB cards), 802.11 abcn Wi-Fi with MIMO, WiFi Direct, Bluetooth 4.0 and dual cameras, 8MP and 2.1MP. The battery promises about 11 hours of use, on par with the iPad Air. The device also has a fingerprint reader that works part of the time.

As far as special software features go, Samsung has its standard multi-windows, SideSync 3.0 for seamless syncing of your phone (including a full copy of your phone showing up on your tablet) and Adaptive Display so the tablet changes modes depending on what media you are consuming (books, movies, Web browsing).