Review: The new Samsung Galaxy Tab S 10.5 in all of its Super AMOLED glory 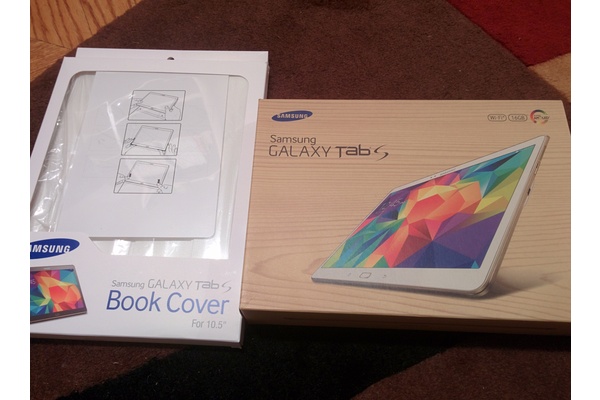 Samsung, the unequivocal king of the Android world, has released its best tablets to date, the Galaxy Tab S line, hoping to strike directly at the Apple Air and iPad Mini with Retina.

Over time, Samsung has pumped out tablet after tablet, all with confusingly similar names and features, and in fact, the Galaxy Tab S is the eleventh tablet from the company in 2014 alone. Each tablet iteration has seen minor technical improvements, and a thinner or lighter design, but so far there is no "killer" model that has been as popular as even the worst selling iPad.

With its Galaxy S Tab, the 10.5-inch model (which we have been using for the past week), is definitely the best the company has ever released, and it compares favorably as the best Android tablet of all-time at its size with the Nexus 10, although the latter is already a year old and its specs cannot compete.

The new tablet has some "killer" hardware features, most notably its display and form factor and its proprietary software is less bloat than it used to be. Read on to get the full review on Samsung's latest. 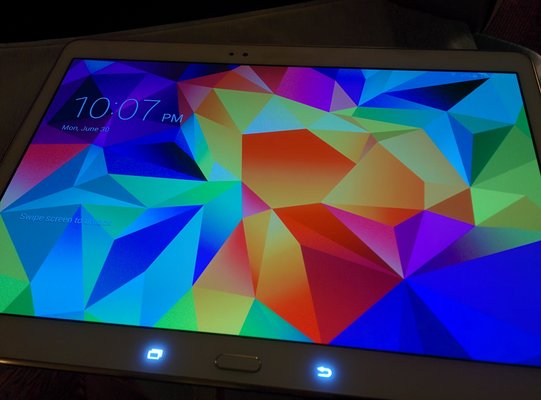 The Galaxy Tab S is a monster. The tablet features a 10.5-inch Super AMOLED display with an incredible 2560 x 1600 resolution that is powered by a Exynos 5 Octa 5420 processor that includes an 8-core ARM Cortex-A15 & ARM Cortex-A7 mix clocked at 1.9GHz and 1.3GHz respectively. There is 3GB of RAM to keep the device humming along nicely, and 16GB internal storage that can be expanded with microSD to up to 128GB. 802.11 a/b/c/n Wi-Fi with MIMO, WiFi Direct and Bluetooth 4.0 are standard. The device also has a fingerprint reader, which remains a useless gimmick just as it does on the iPhone. The thinnest tablet to date, the Tab S is just 0.26 inches thick and weighs just 1.03 pounds, both lighter and thinner than the iPad Air although those millimeters and grams are hardly noticeable.

There are dual cameras, 2.1MP upfront for video chat, and 8MP for standard photo taking. The 7900 mAh battery is standard, as well, and the whole package is held together by Android 4.4.2 KitKat with Samsung's own TouchWiz UI, which continues to look cartoonish but is getting better as each new tablet and phone arrives. 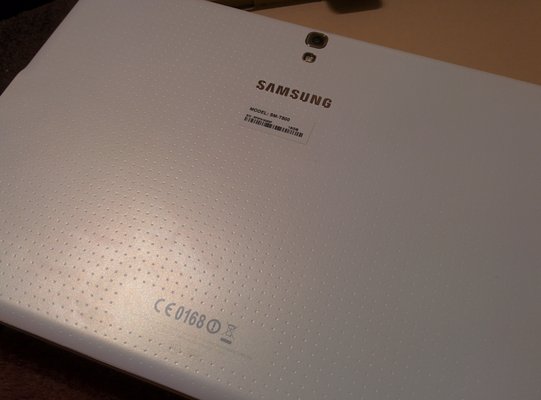 While the components are killer and should leave zero complaints for Tab S owners, the design is (as most Android tablets are), drab. Samsung has a very basic plastic design up front with their standard home menu physical key and two virtual keys, realtively large bezels, and a brushed metal finish around the edges. On the sides we have dual speakers, the USB port, the microSD slot and the headphone jack. On the bottom we have the mic and up top we have the volume rocker and power buttons as well as the IR blaster for controlling TV and other devices. On the back, the device has the speckled (kinda rubbery) design which is nice to the touch, and the main camera, and that's it. Everything here is pretty plain, and reminds of past Samsung tablets and especially of the new Galaxy S smartphones. 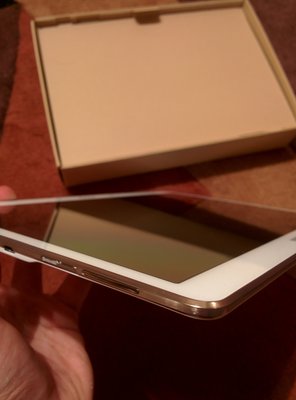 Ergonomically, the tablet is a joy to hold, and is light enough that one-handed travel does not kill your wrists. The speakers being on the side means you are most likely going to be blocking at least one with your hands, which is a flaw but otherwise Samsung did a nice job of making the tablet easy to carry and use, bland design and all.

There is no point talking about the Galaxy Tab S without expanding on the gorgeous Super AMOLED display. The display is a long way removed from its predecessors in which the colors were so out of whack they looked like they were in the Speed Racer remake. The new display, especially with such a nice resolution, is clear, sharp, bright (and yes, still colorful) although not overly saturated. Samsung has included a few welcome videos that show off the display through different landscape shots, and they look as nice as my QHD monitor, which I had certainly never seen before on a tablet. Outdoor viewing is improved, and the blacks are actually close to black unlike the gray seen in other tablet displays. Text and icons are incredibly sharp and clear. Doing anything on the tablet is great just because of the display.

By using the Super AMOLED over a more traditional IPS display, Samsung says the tablet does not need as much power, and can also be thinner and lighter, meaning tablets will only get smaller from here on out. The company can achieve such results because the Super AMOLED does need its own backlight. Over the course of the week, I found myself turning down the brightness almost on a regular basis (unless I was outside) because of the richness of the colors and the overall brightness of the display. I expect most will do the same.

The Samsung Galaxy Tab S definitely hits on the hardware side, with a gorgeous display and top-of-the-line specs that will still be powerful nine months from now. There are very few devices that can boast that. A bland design takes away from the appeal but if Samsung changes the design anymore, they probably risk a lawsuit from Apple. Just kidding. Or am I.

Samsung promised 11 hours of battery life, in line with the iPad Air and I found this to be accurate with moderate use. Just like with iPads, there was never really a time where I felt I needed to be near a charger although there did seem to be some drain when using specific features, like multi-windows.

Performance, as expected, was stellar. Flipping home pages saw no lag, however I was almost shocked that some apps did see some lag when I had over 10 apps running in the background. With an 8-core processor and 3GB RAM, it's hard to imagine performance stinking and it does not, at least for the most part. 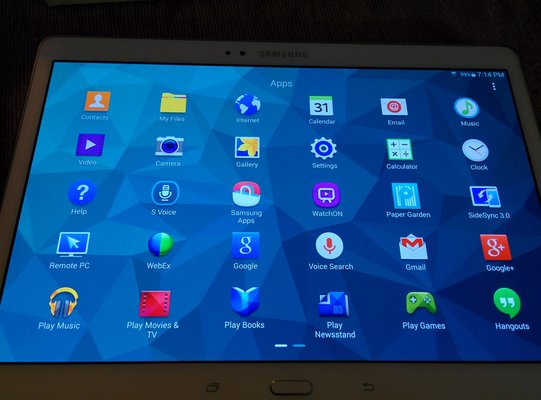 Samsung has stuck with their TouchWiz user interface, which I do not find anywhere as appealing as stock Android but it has been improving over time and is less abrasive and intrusive now, which is a good start at least. What Samsung really wants is for you to use their curated app store and their own apps, but it just cannot compete with Apple and Google, or even Amazon, who have built entire ecoysystems that are near flawless at this point.

There are a lot of pre-installed apps but not as many as I was expecting. Samsung included their own S Voice, Samsung Apps, WatchOn, Paper Garden, SideSync 3.0, Cisco WebEx, Screensaver, Evernote, Milk, Flipboard, Hancom Office Viewer, Dropbox, NYTimes, BusinessWeek and Netflix. While this reads like a lot, anyone who has used past Samsung smartphones would be pleasantly relieved that the bloat has been reduced somewhat.

In addition, Samsung has its own pull down notification menu, which simply is too messy to be useful. There are the standard app notifications, but also a brightness setting, a volume setting, "Quick Connect," "S Finder" and then the ability to shut off Wi-Fi, GPS, vibration, screen rotation, sync, Bluetooth, and at least ten other settings. It is intimidating.

The left homepage is all Samsung, allowing you to to add bookmarks for quick access, add your favorite stocks, set an alarm and also set a few of your favorite apps to be available right from the page. Once again, it is too busy and messy and seems wasted. On the bottom right hand corner we have the app drawer, and on the bottom left hand side we have a small folder icon which leads you to your files. This is practical and handy, but it is almost hidden down in the corner and I feel most people will overlook it.

Samsung has made sure to actively promote the newly updated SideSync feature, which allows you to mirror you Galaxy S phone to the screen and operate it right from the tablet, including texting and pulling files off. It looks cool, but how many times will you really need it?

Milk was a cool addition, as the Internet radio service allows you to "fine tune" your radio stations and has hundreds of pre-selected stations to choose from. The service is backed by Slacker, and is aesthetically pleasing. Most of the other features are not new, but apps like WatchOn remain relevant and useful, making the tablet into a faux TV remote. Gesture swiping from the right brings up the multi-window options, which remains Samsung's best and most innovative feature. Having two apps open simultaneously is truly a killer app. 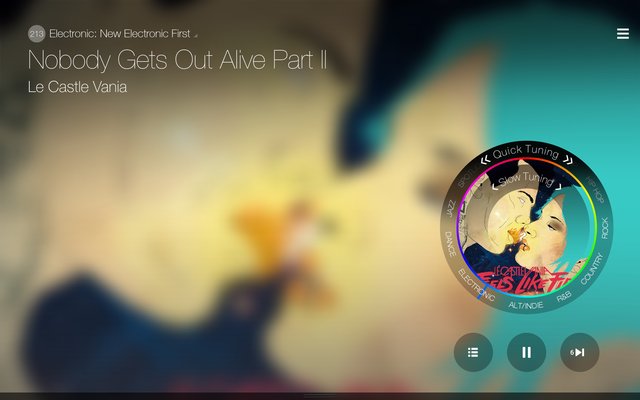 Overall, Samsung would do well to ditch TouchWiz and to stop trying so hard to make so many innovative software features that the interface gets so crowded and confusing. There is absolutely no reason for Samsung to have 20 options in the notifications area, when Google and Apple have nine. I had to use the search function within the settings app to find how to factory reset the device because it was so hard to find manually. Ridiculous. Multi-Window and WatchOn are winners, but the rest seem like fluff. 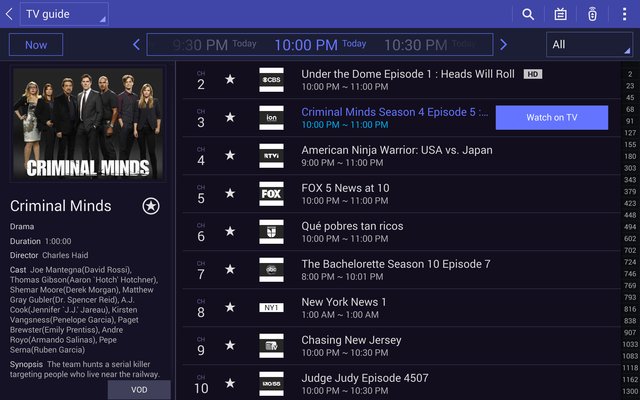 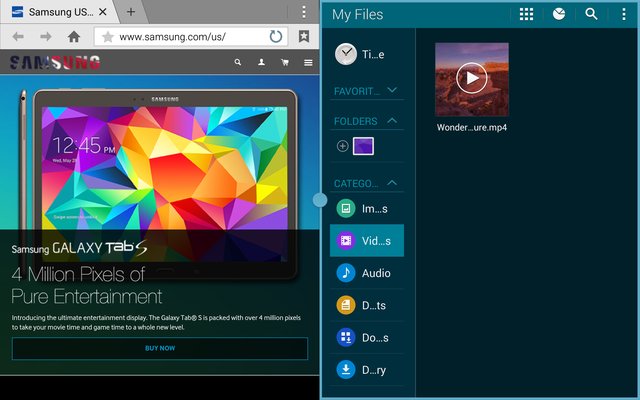 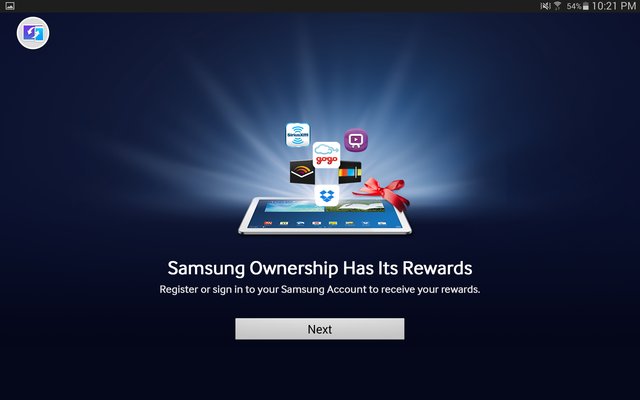 Samsung has made the best Android tablet to date at its size, thanks mainly to its stunning display and incredibly thin and light size. Stock Android has not been skewed to the point of no return, and most of Samsung's own apps and features can be ignored for the most part at all times.

Performance rocked for the Galaxy Tab S, thanks to high-end specs, and its design, while bland, was not as ugly as previous models. Where the tablet lacked, was with the overall experience of using the tablet. Apple does not have this problem and the Nexus line of Google reference devices do not either. The software and ecosystem experience seemed patched together and not fluid, and most of Samsung's new features were borderline confusing to understand at first, or just not reasonable for the average person.

Luckily for Samsung, a lot of those downsides can be ignored after looking at the display. I can also imagine the tablet running on a stock version of Android L, and I see a bright future.


As a side note, the Book Cover accessory was also confusing for no reason, begging the question of why?