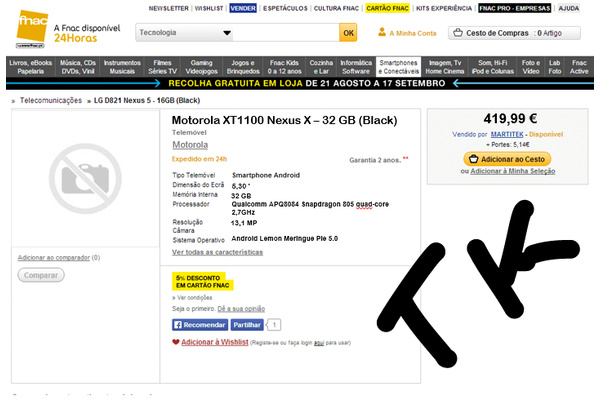 Thanks to a new blog post, we have a few screenshots of the alleged Nexus X built by Motorola.

The pre-order pages were posted and quickly removed from the fnac.com retailer website, showing off the Google reference device and some basic specs.

Additionally, the pages only showed a 32GB and 64GB model, so perhaps Google has done away with the more popular (and cheaper) 16GB model. The price tags also seem extra high compared to past Nexus devices, starting at €419.99 (usually a 1-to-1 conversion to USD, so $415 off-contract for 32GB).

Finally, take the report with a large grain of salt, as the source also notes that the fnac site is "very open to hacks and modified pages" so someone could have just been having a little fun. Regardless, we will know by October about the new device, the standard launch window for the reference devices.