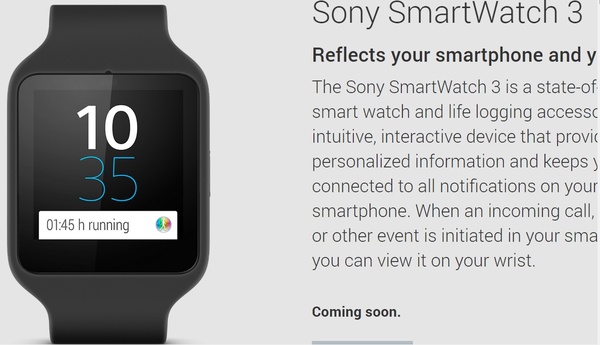 We didn't have a set release date for the new Sony SmartWatch 3 - the first from the company to use Android Wear, but at least now the launch seems imminent.

Google has put the SmartWatch 3 up in the Google Play Store, including the price at $249 and the words "Coming Soon."

The company says the watch will work as a standalone and will also sync to your Android Wear capable smartphone for better functionality.

Sony's SmartWatch 3 has a 1.6 inch 320 x 320 LCD touch display, a stainless steel body, and IP68 dust and water-resistance. Under the hood is a quad-core ARM Cortex-A7 chip at 1.2GHz, 512MB RAM and 4GB internal storage. As is standard, the device has Wi-Fi, Bluetooth 4.0 BLE, NFC, GPS, an ambient light sensor, accelerometer, magnetometer and a gyroscope. Most importantly is the microphone which allows for voice control.Better than other current devices, the SW3 has a 420mAh battery good for 48 hours of usage. The watch is also extremely light at 38 grams.

The company has also stuck with the "athletic" look of its past smartwatches, but at that price it will likely have a hard time competing with more elegant devices like the Moto 360 and LG G Watch R.