Google Drive and associated apps are down (CONFIRMED)

According to hundreds of Twitter posts, Google Drive and its associated apps, such as Google Docs, are down, globally.

Google hasn't confirmed the outage yet, but its app status monitoring page confirms the outage: 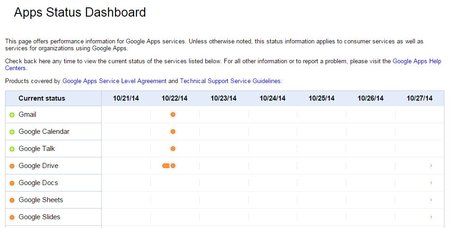 #googledrive is down. *panic mode*


UPDATE 1850 UTC: Problem seems to continue, this is the official status log as of now from Google Apps team:

10/27/14 5:20 PM
We're investigating reports of an issue with Google Drive. We will provide more
information shortly. Affected users will notice 500 errors and latency.

The problem with Google Drive should be resolved. We apologize for the inconvenience and thank you for your patience and continued support. Please rest assured that system reliability is a top priority at Google, and we are making continuous improvements to make our systems better.