U.S. Marshals fly Cessnas to collect data from thousands of cellphones in search of criminals 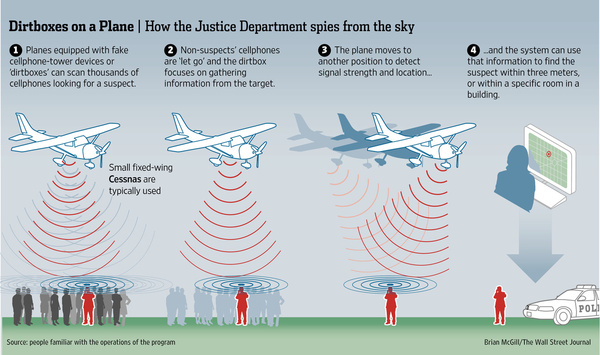 According to new reports, the Justice Department via the U.S. Marshals Service program is collecting data from thousands of Americans cellphones in an effort to find criminal suspects.

The program flies small Cessna airplanes across the U.S. equipped with "dirtboxes" (hardware that mimic cell towers and basically trick cellphones into reporting their unique registration information back) allowing the criminals to be tracked to within 3 meters of their location.

Unfortunately, a criminal is not usually sitting alone in a rural area, so the devices collect data from thousands of innocent American's phones. The flights are said to be done regularly.

All modern phone are internally programmed to connect to the strongest cell tower signal available, and the reports claim that the dirtboxes will always identify as the strongest signal, even though it does not. Any phone that connects, even for a second, will then relay back its unique registration information. Full phone encryption, found on Android 5.0 and iOS 8.x devices, does not matter.

While the overall goal of trying to find fugitives, drug dealers and other criminals has been approved by court order, it is unclear if the orders give free range for any kind of method, like the "dirtboxes" say the sources. It is also unclear how long the government will hold onto the data collected from unsuspecting innocent Americans.

The tower spoofing is a new method yet seen outside of military use, say civil liberties experts. This is not the last we've heard of this story.