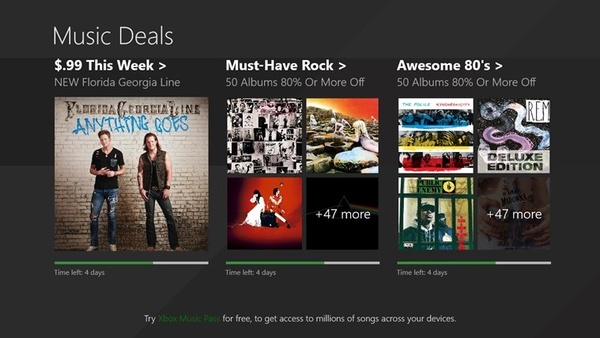 Microsoft has come along with another insane promotion through its Music Deals app, this time literally giving away popular albums for free.

User with the Xbox Music app or Xbox Deals app in the United States can take advantage of the freebies for a limited time only. In the Music Deals app, browse "Holiday Freebies" and you will find the albums in there.

Among the albums on offer are Eminem's 2013 chart topper The Marshall Mathers LP 2, Dr Dre's 2001, Kanye West's Graduation, Rihanna's unapologetic, U2's All That You Can't Leave Behind, Swedish House Mafia's Until Now and many others.

The deal is in place until December 15 so remember to go grab what you want legally for free before then.

The Music Deals app launched back in October and since then it has offered some really surprising deals. It offered Taylor Swift's 1989 for 99c for a short time and an additional 101 albums were priced at $1.99.

You can't beat free though, so check it out.