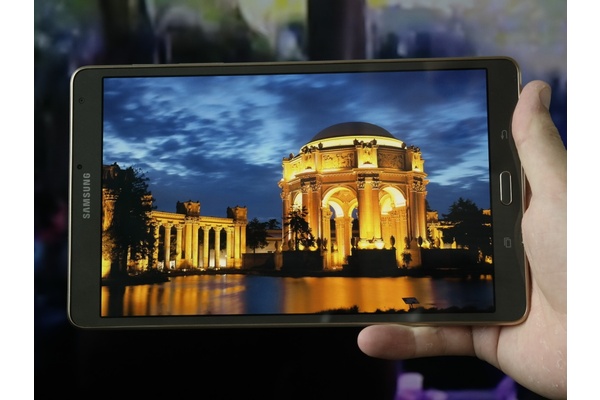 According to new reports, Samsung's Galaxy Tab S2 8.0 and Tab S2 9.7 tablets are coming next month, high-end successors to the Galaxy Tab S.

The tablets will be thinner than the standard bearer iPad Air, and both will be available as Wi-Fi or Wi-Fi/LTE models. Just like their predecessor, the tablets will launch around the globe including the US, Canada, Europe, China, Latin America, Hong Kong, Korea, and India.

Powering the tablets are a 64-bit Samsung Exynos processor, 3GB RAM and Android 5.0.2 out of the box. The S2 8.0 has an 8-inch SuperAMOLED display at 2048 x 1536 while its larger brother has a 9.7-inch model and the same resolution. The smaller device is just 260 grams and the larger model is 407 grams. Although there will be few that can actually use it to its full potential, the S2 has a Cat. 6 LTE modem allowing transfers up to 300Mbps.

Design-wise, it is expected to look just like the predecessor Galaxy Tab S 8.4 (pictured) but with the aforementioned 4:3 ratio.