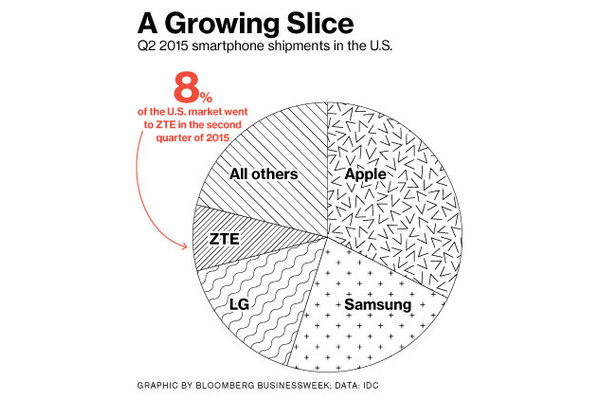 In a surprising development, Chinese smartphone OEM ZTE has taken 8 percent market share in the U.S.

The numbers come via IDC who says ZTE nearly doubled its share year-over-year for the Q2 2015. At 8 percent, the company is now in 4th place in the U.S., beating out much bigger brands like Sony, Lenovo/Motorola, HTC, BlackBerry and Alcatel.

"We came from nowhere, and now we are a solid force," says Lixin Cheng, head of ZTE's U.S. operations.

ZTE first started with smaller pre-paid carriers like MetroPCS but is now available on Sprint, T-Mobile and AT&T. Additionally, the phones can be found in Wal-Mart, Target and Best Buy.

Unfortunately for the company, IDC says revenues are not moving in line with the market share growth. Revenue only grew 4 percent year-over-year even though sales were up 100 percent, suggesting ZTE is only taking share by cutting prices. The company just launched a high-end model for $450, but it is unclear whether consumers will care about that device when they can get their iPhone or Galaxy.