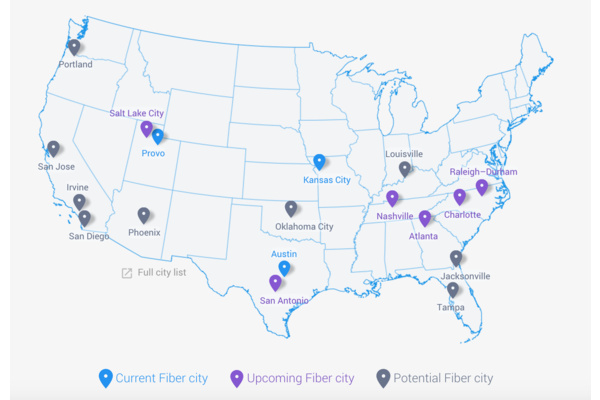 Google has announced another major expansion to its Fiber program, adding Jacksonville, Tampa and Oklahoma City.

Google Fiber has gigabit download and upload speeds, making it nearly 100 times faster than the average broadband speed in many places in the U.S.

Adds the search giant: "Today we are inviting Oklahoma City, OK, Jacksonville, FL and Tampa, FL, to explore bringing Google Fiber to their communities, as we did last month with three other cities. These growing tech-hubs have a strong entrepreneurial spirit and commitment to small business growth. Their list of accolades is long--from Jacksonville's title as a top 10 city for tech jobs, to Tampa Bay's #2 spot on the list of best cities for young entrepreneurs, to Oklahoma City's recognition as the #1 city to launch a business. One of our goals is to make sure speed isn't an accidental ceiling for how people and businesses use the Web, and these cities are the perfect places to show what's possible with gigabit Internet."

With the three new cities, there are now 15 metro areas with Google Fiber.