ARM: Your phone will be more powerful than the Xbox One, PS4 by end of next year 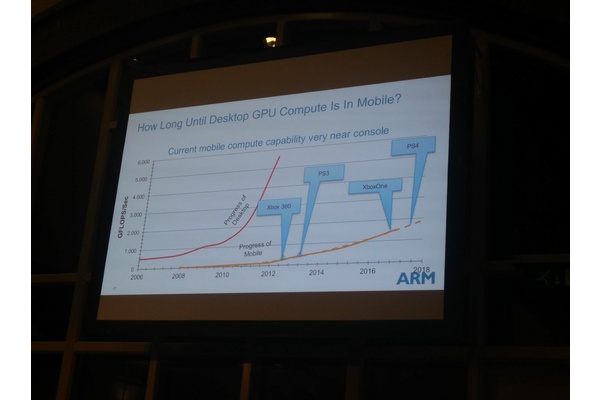 According to ARM, your phone will see such a leap in computational power by the end of next year that they will be more powerful than the PlayStation 4 or Xbox One.

The chips will, at least, be able to generate graphics that are on par with the current-gen dedicated consoles, noted ARM ecosystem director Nizar Romdan.

"Mobile hardware is already powerful," said Romdan at Casual Connect Europe. "If you take today's high-end smartphone or tablet, the performance is already better than Xbox 360 and PlayStation 3. It's catching up quickly with Xbox One and PlayStation 4."

As a simple way to compute their power, the current consoles can compute around 1.84 TFLOPS (floating point operations per second (in this case TerraFlops). By the end of 2017, the most powerful chips will hypothetically be able to output 2 TFLOPS.

While gamers are not likely to ever move exclusively to mobile gaming (touch is not always as fun as a controller), the chips will have the ability to power the next generation of virtual reality.

"Our view is that mobile VR is the use case that could unlock the potential of mobile for hardcore gamers," Romdan added. "For once, mobile devices are on par with PC and consoles in terms of experience [when it comes to the form factor of VR]. We won't have the same processing. And battery life is a problem. But it is the same user experience. That could be a game changer for mobile gaming."