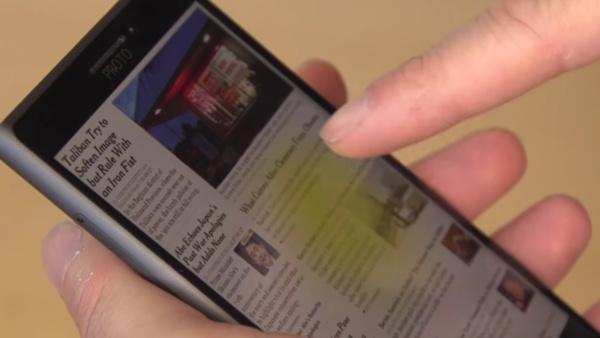 Even if not all products out of Redmond have captured the market (yes, I'm looking at you Windows Phone), you have to give it to Microsoft Research for being one of the most innovative R&D departments in the country. Be it HoloLens or the AI features now used in Cortana, every one loves a glimpse at the future of computing.

One those futuristic glimpses might as well be in the video below. Microsoft Research has released a video on YouTube in which it demonstrates a new type of predictive touch display which it calls Pre-Touch.

The display on what looks like a Lumia looking prototype recognizes when a hand or a finger is coming close to the display, and even measures the pressure when squeezed.

Like you can see on the video this enables all kinds of handy tricks with the user interface. Knowing where the users hands are before the touch makes it possible to cater for a specific need, for example one handed use always on the right side of the phone.

As this video comes from Microsoft Research and not a keynote speech at the Mobile World Congress, it'll probably still be a while before we see this in our own handsets. Maybe that will happen when Microsoft allegedly transforms its smartphone business under Surface brand.