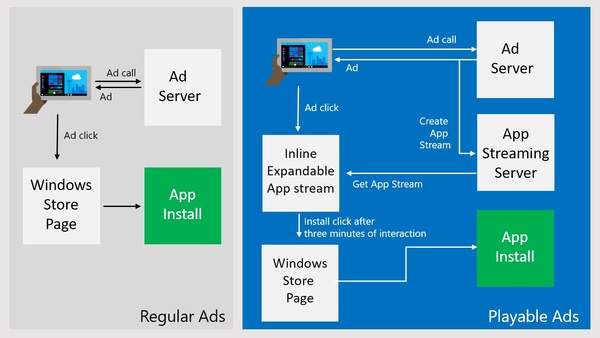 Microsoft's Playable Ads will let Windows 10 users try out an app before downloading it and installing it onto their devices.

The user can click / tap a promo ad and a full version of the app will stream to their device for three minutes, letting them test it out fully without downloading and installing it. It is convenient for the end user as you don't have to install something before testing it, and useful for the developer because it will reduce the number of disinterested users who will leave an app unused or just uninstall it shortly after downloading it.

Since the new Playable Ads are inline expandable ads, the user will not leave the current app context after ad click. Users can abandon the app stream at any point of time.

Developers don't really have to do anything to participate, as Microsoft does all the background work. No need for new packages or anything.

The feature is currently being tested as part of a limited preview.