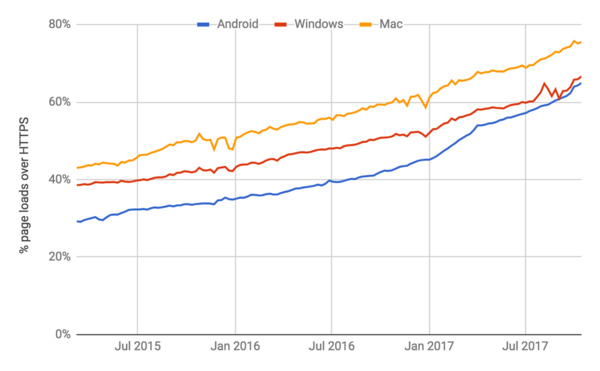 Google has released a new blog post which celebrates the success in adoption of secure web connections. A year ago the search giant announced that it would start giving preferential treatment to secured websites, now a year later it seems to have all worked out amazingly.

In its web browser, Chrome, Google started to mark websites using regular HTTP and included visible forms as not secure. This meant that most websites had to make conscious efforts to adopt HTTPS.

Obviously no website wants to be marked anything else than secure in any browsers, much less on the popular Chrome, and thus web services have been getting more safe in spades. According to Google 71 out of 100 most popular websites in the world now use HTTPS. An impressive increase of 37% in just one year.

The fight for safer web is far from over but Google's efforts have definitely paid off, and we can expect the trend to continue as the rest are moving towards HTTPS as well.

You can't, however, disregard the effect of project Let's Encrypt which brought free and easy to use SSL certificates to the public, and more importantly to webmasters. Before Let's Encrypt many of the admins would have had to pay hundreds, even thousands, of dollars every year just to buy the certificates. While that might not be a problem for the top 100 websites it does help significantly with less popular ones.

According to Google's stats on its Android operating system 64 percent of traffic is encrypted, Windows is just above it with 66 percent, and on Mac already more than 75 percent is encrypted.