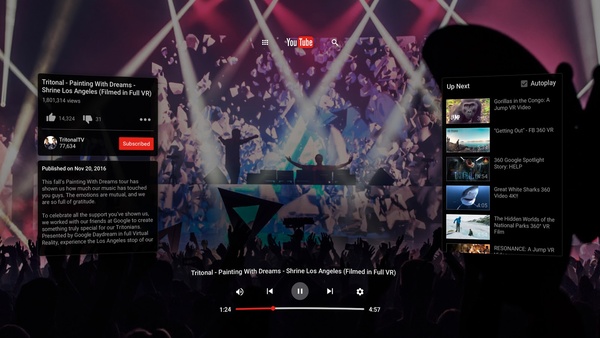 Clearly people are looking for some other reality than the one we live in. It seems like in the last few years every technology company on the face of the earth has developed some kind of alternative reality device or application.

Of course the largest online video service YouTube is no different, not least because its owned by Google, who likes to innovate with technology. Now YouTube VR, the virtual reality app for YouTube, has been made available on Steam.

You can download the app starting today from the Steam store. The app supports both 360 degree VR videos as well as VR180, a format meant for easier and cheaper to film 180 degree clips. There's also support for traditional video which can be viewed with a VR headset.

To get the entire benefit of the app you obviously need a virtual reality device. Unfortunately at this point the support for such devices is fairly limited as you'll have to have HTC Vive.

There are still bugs and the device support is obviously something to be improved, and that's probably why it was released via Steam Early Access, but one can hope for quick updates in the future.