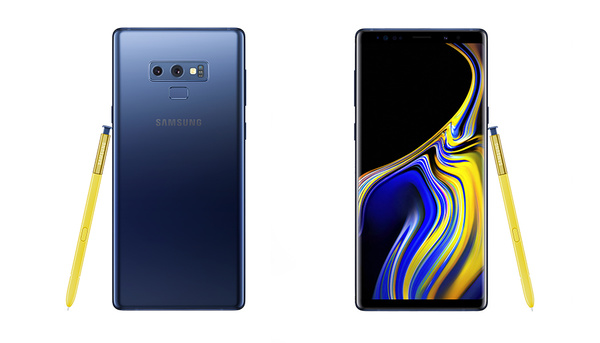 The new Galaxy Note 9 delivers what Samsung says is "all-day performance" starting with the 4,000mAh battery (fast wireless charging supported), the largest ever on a flagship Galaxy phone. Under the hood is a 10nm processor (Snapdragon 845 or a Samsung Exynos, depending on location) and a Water Carbon Cooling system and on-device AI-based performance adjusting algorithm to deliver powerful yet stable performance.

Incorporated from the Galaxy S9 family are new stereo speakers a variable aperture f/1.5-2.4 12-megapixel primary camera, with an additional 12Mpxl camera on the back. New software AI features improve the quality of your photos too. The software can identify elements of a photo, such as scene and subject, to automatically classify it into one of 20 categories and instantly optimize it based on the category. It can also prompt the user to retake a photo if it detects blurry elements, or if a subject blinked, for example.

Perhaps the most note-worthy improvement is the new S Pen, which incorporates Bluetooth Low Energy (BLE) support. The connected S-Pen can now be used as a remote control for selfies or for giving presentations. It automatically recharges itself while popped into the device, of course.

With the new connected S Pen, Samsung touts the device's suitability for DeX, which turns a HDMI-connected monitor into a second screen complete with a windowed Desktop environment. DeX can be used as a way to watch your streaming media on a larger screen, or to carry out tasks like photo editing, word processing, building and giving presentations and so forth.