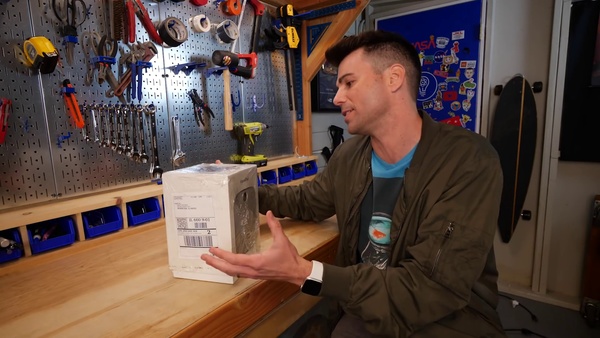 A video made by a former NASA engineer went viral this week, but it turns out some of the reactions of package thieves were staged.

Mark Rober delighted the Internet with his invention; a smart glitter bomb with multiple cameras, GPS and fart spray aimed at package thieves. After a package was stolen from his residence months before, Rober designed a device that would spray the thieves with glitter when opened, film their reactions and also unleash an intoxicating fart spray.

Even if the devices could not be recovered, the four included phones recording the reaction were set to upload video to the Internet using LTE. GPS also allowed Rober to find out exactly where the packages are.

However, Rober has since re-uploaded the video to cut out about 90 seconds of reactions after finding out that some of the reactions were staged. Unbeknown to Rober, a friend had recruited others to fake their reactions, posing as victims.

After the edit and re-upload, Rober apologized to his subscribers and explained the situation.

Note about 2 missing the reactions in the video- I was presented with information that caused me to doubt the veracity of 2 of the 5 reactions in the video. These were reactions that were captured during a two week period while the device was at house 2 hours away from where I live. I put a feeler out for people willing to put a package on their porch and this person (who is a friend of a friend) volunteered to help. To compensate them for their time and willingness to risk putting a package on their porch I offered financial compensation for any successful recoveries of the package. It appears (and I've since confirmed) in these two cases, the "thieves" were actually acquaintances of the person helping me. From the footage I received from the phones which intentionally only record at specific times, this wasn't clear to me. I have since removed those reactions from the original video (originally 6:26-7:59). I'm really sorry about this. Ultimately, I am responsible for the content that goes on my channel and I should have done more here. I can vouch for that the reactions were genuine when the package was taken from my house. Having said that, I know my credibly is sort of shot but I encourage you to look at the types of videos I've been making for the past 7 years. This is my first ever video with some kind of "prank" and like I mentioned in the video it's pretty removed from my comfort zone and I should have done more. I'm especially gutted because so much thought, time, money and effort went into building the device and I hope this doesn't just taint the entire effort as "fake". It genuinely works (like all the other things I've built on my channel) and we've made all the code and build info public. Again, I'm sorry for putting something up on my channel that was misleading. That is totally on me and I will take all necessary steps to make sure it won't happen again.


Here's the now-edited video of Rober's revenge on package thieves.