GUIDE: Wi-Fi speeds are slow? Here are some tips

Many home network problems are related to a slow Wi-Fi connection, which causes tension for all family members using a wireless network. At worst, the problems cause video stuttering, slow download speeds, and can even make remote work difficult or impossible.

Fortunately, a lot of wireless network problems are relatively easy to solve. In this guide, we listed easy tips to improve your own WLAN connection, which should work with all Internet operators.

What are the common causes of WiFi problems?


In practice, the most typical problems are caused by bad placement of the base station, obstacles and neighbors. The base station is the part of the network that transmits the WLAN signal: in many homes this is the same thing as a modem or router, which itself has a WLAN base station / router.


First of all: Measure the internet speed using a wired connection


The very first thing you should do is test the internet speed using a wired Internet connection. Of course, this is not possible in situations where you are using, for example, a router or access point with no Ethernet ports. In most cases, the router will have several Ethernet ports to connect to.

The reason we do this is to test the Internet speed itself, with the problems that could be attributed to Wi-Fi ruled out automatically.

If you can connect the computer directly to the router, you should do the following:
The end result should look something like this:

In this case, a nominally 100/10 internet connection is used, the results of which correspond quite well to the promised speeds. The number on the left, ping , tells the response time to the server. It should be something under 100ms level, but it is not an important point here.

The middle number tells you the most important thing: how fast your internet connection is from the server to home. So in practice: how quickly you can download files or how high-quality video you can watch with your connection. The last number on the right tells you your connection speed to the Internet (upload), i.e. the speed with which you can, for example, add your own videos to YouTube.

Now, dig out your internet subscription contract somewhere and compare the numbers in it with these results. If, as in our example, the numbers are close to each other, there is no reason to worry: your internet connection is working as it should.

If, on the other hand, there is a significant difference in the numbers, e.g. you pay for a 100/100 connection but the numbers are at the level of 5/2, you should clarify the matter with your operator.

If your internet connection figures are fine, but WiFi is causing problems, let's move on.

Is there something wrong with the device?


Next, you should check if WiFi works in the same part of the home, but with a different device. If the tablet plays correctly, but the laptop doesn't, even though both use the same WiFi connection and are in the exact same place, the problem might be in the laptop's settings.

It's worth looking into the matter before a major renovation or unnecessary waste of money on other variables.

Problems with only one device? What to do?

If you have solved the situation with the help of several devices to the point that you are sure that the problem concerns only a certain computer, you have to try to solve it somehow.

The fact is that some computers and access points just don't like each other for some reason. This should be ruled out by trying several different devices, at the same distance from the base station, preferably similar devices.

When you're absolutely sure that the network works otherwise, but one of the devices - typically the computer - doesn't "like it", you should try one of these:

The easiest solution to this is to try to find a WLAN channel where there are no other networks. A wireless LAN uses a limited number of channels.

At this point, it should be clarified that WiFi networks always use more than one channel. And the fact that you happen to be using the exact same channel as another network is usually not a problem. The biggest problem arises when you are "overlapping" with a network (eg. you use, for example, channel 11, which is "reflected" not only on channels 10 and 12 - and your neighbor uses channel 10. In this case, you have an overlap that is worse for a wireless network than full overlap).

A great tool to find out your own channel situation is WiFi Analyzer for Android, which conveniently shows nearby WiFi networks and which channels they use.

Below is a diagram of our test: 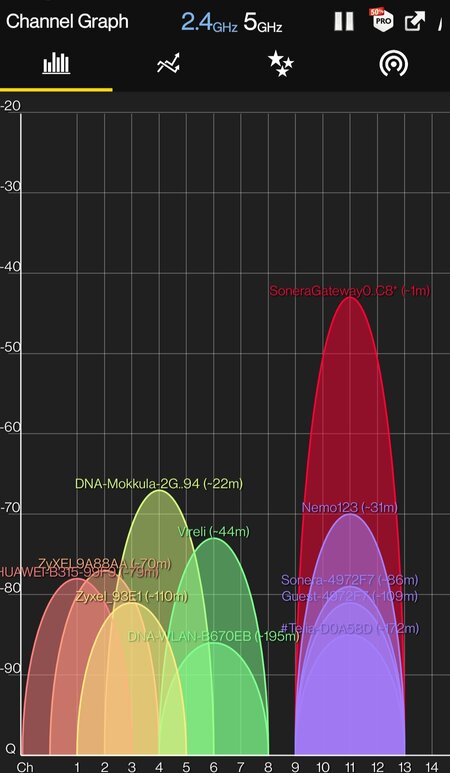 If possible, always use channels 1, 6, or 11 on a wireless 2.4 GHz network. Use other channels only if your neighbors use channels that overlap with yours.

In our example, the problematic channels are practically all channels up to 1-10, because the neighborhood has taken over the lower channels one by one - and probably slow down the operation of each other's WiFi networks.

If you find that it is worth changing the channel, the solution is this: Find the instruction manual of your router / modem / laptop and find out how you can change the channel of the WLAN in use to one that is not congested. If there are no free channels at all, choose the least congested one.

Switch from 2.4GHz to 5GHz network


If, on the other hand, the previous graph looked like no free channels could be found, it is possible to change the frequency of the WLAN network completely separately.

With the WiFi Analyzer mentioned above, we found out in our test site that the 5 GHz frequency range is almost empty of traffic: 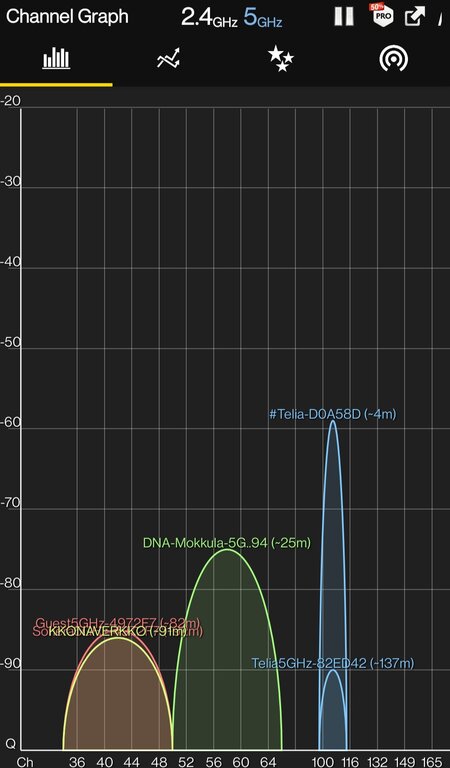 There is plenty of room in the 5 GHz frequency range


Of course, the problem here is that if the devices in use don't support the 5 GHz range, the project will stop there. But it's worth a try.


One of the tips suggested to us concerned WiFi networks where several channels are in use at the same time. In basic mode, networks use one 20 MHz "wide" frequency band, i.e. channel, for their operation.

But many newer base stations also offer an option where the width of the channel used by the base station is automatically determined between 20 MHz, 40 MHz and 60 MHz. In theory, when using three channel slices, the speed should also increase.

Unfortunately, when using, for example, a 60 MHz wide channel, the ability of the signal to pass through walls becomes difficult, because three signals traveling at different frequencies should all be able to pass through the walls. In addition, some devices, such as older computers, tablets or phones, may not agree to work with such a solution at all.

That is, if you have tried all the tips up to now, but the problems continue, we recommend you also try changing the automatic channel width to a fixed width of 20 MHz.

Find the right place for the base station


Often, what you think is the most logical place for the location of the router / base station is not the best solution in real life.

It's worth doing a small test with the previously used WiFi Analyzer and walking around the apartment to different places and stopping to measure the WiFi signal in each place for a few minutes. The application draws a graph on its tab, where you can see the signal level of your own WLAN network at different times.

By deducing from this, you can easily find the points in your home where the signal is weakened the most (the curve is at its lowest point). When you are aware of these points, you can try to move the router / base station / access point to a better place - and test again. Often the walls, doors and especially the refrigerator and freezer effectively block the flow of the wireless traffic. 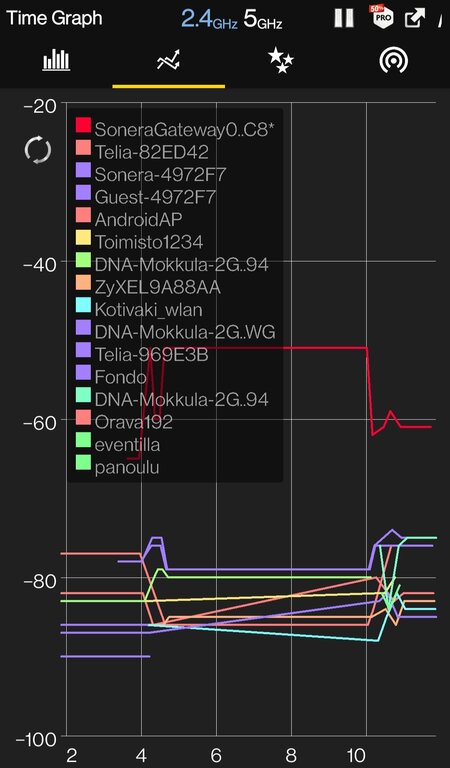 In the graph above, we can see how moving closer to the base station has increased the signal strength.

Is someone else using your network?


If you haven't encrypted your wireless LAN behind a password, your neighbor may very well be using your WiFi. If your network doesn't have a password, you should dig out the base station's manual and set one.

However, the very first thing you should do is not to rush the neighbor with a shotgun - many devices connect to open networks by themselves, that is, to those that are not protected by a password at all. So it could be an accident: your neighbor's new smart refrigerator may have decided to use your network.

Mesh network, will it help?


If your home is very labyrinthine, has thick partitions, is large and possibly has several floors, it may be that your problem is purely physical. That is, the signal "can't" pass through all the obstacles to every corner of the 400m2 three-story villa. The same problem is actually quite typical in multi-storey front-line houses.

In this case, a mesh network can help. This is not a free solution, but requires changing the base station to mesh solutions.

By sprinkling mesh jars in suitable places in the house, you can easily make a net to cover every corner of the home.

But before investing in a mesh network, you have made sure, based on the previous points, that the problem is specifically the carrying capacity of the network, and not other possible problems.


In particular, the capacity of WiFi network equipment offered by providers is typically quite weak. If all the methods listed above have been tried, you should consider upgrading the base station to one with decent external antennas. You usually have to pay a little more for these, but it's worth buying a base station on the open market and trying to see if the problem would be solved this way - and returning the purchase if the problems persist.


A crazy-sounding suggestion, but this is also often a viable option. Those devices that can be connected to the base station / router with an Ethernet connection should be connected that way if possible. Of course, this is not possible with mobile devices, and of course not if the terminals are all tablets or similar.

Written by Petteri Pyyny for fin.afterdawn.com, and translated by James Delahunty.