Given the domination of the home video and TV markets by various digital formats, connecting a PC to your home theater makes more sense than ever. With the introduction last year of LiquidTV, Nero hoped to provide another good argument to make that connection.

For the last month and a half I've been using LiquidTV, and I believe it's capable of filling a market niche that has been underserved until now. It doesn't try to be everything to all people. Instead it has a narrow focus on turning your PC into a TiVo. 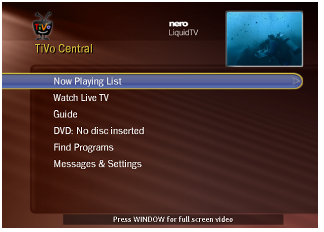 When I say TiVo I don't mean it in the generic sense of a DVR. LiquidTV actually uses the TiVo interface, as well as requiring a TiVo subscription. Fortunately a one-year subscription is included with the purchase price.

If you buy the retail box, so is a Hauppauge WinTV-HVR-950Q USB capture device. Whether you opt for the retail bundle or just the software (via download), the cost is comparable to other TV recording products like BeyondTV or SageTV. The first year's TiVo service ends up being free.


PC based DVRs aren't for everyone, but they do have some distinct advantages over a standalone unit. For starters consider the price.

If you want a Series3 TiVo, you can get a refurbished unit for $300. Add a one year TiVo subscription and the price jumps to about $430. This will get you 250GB of storage and two TV tuners.

For for less than half that you can buy the LiquidTV retail bundle, which gets you the software, a single USB tuner (with remote control) and the same 1 year subscription. If you have an old PC around you may not even need to buy any hardware. Mine is running on a five year old P4 2.8HT CPU with just 512MB of RAM.

If you need a hard drive, a 250GB model will cost you around $60 or less. A second tuner like the one that ships with LiquidTV will cost you another $100.

If you don't already have an old computer to use, a refurbished system ready to install LiquidTV can easily be found for $200 or less. As you add capabilities, like additional storage and tuners (LiquidTV supports up to 4), the PC's cost advantage increases significantly.

Of course the biggest savings is more long term. There isn't much you can upgrade on an actual TiVo. You can't add more or newer capture hardware. You also can't add new video and audio codecs or add new physical interfaces for connecting to the latest and greatest home theater equipment.

In fact, unless you have a pretty good technical background, the only upgrade you're likely to be adding is an external hard drive. A PC running LiquidTV can be upgraded as a standard PC. If you're not comfortable performing the upgrades yourself you can always go to your local computer shop to have it done.

I've spent about a month regularly using LiquidTV. In the beginning I had problems with poor MPEG-2 decoding, pillarboxed video (4:3 in a 16:9 frame) not displaying correctly on my 4:3 analog TV, and a few minor complaints. With the exception of those detailed a little later they've all been resolved with the latest software update.

Obviously the biggest selling point for LiquidTV would have to be the TiVo interface. If you don't like TiVo you won't like LiquidTV either. Most people, especially those looking for an experience more like a set-top box than a computer, will probably like it. 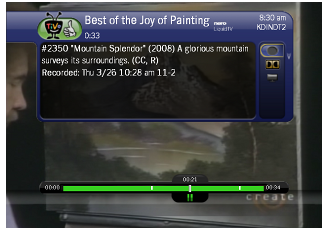 Program information, in particular, is quite impressive as it should be. After all this is what you're paying your subscription fee for. Information as detailed as the codes used in production to identify different episodes is included. These numbers are often used on fansites and online episode guides.

As nice as the TiVo hardware is to use, there are some areas where it's a clear improvement to be using a PC. Perhaps the most obvious are file transfers and video compression.

Although it has become fairly routine to copy files from a TiVo to your computer, using LiquidTV it becomes even easier and there are more options. The simplest way to handle this is sharing the folder you set for LiquidTV to store your captured TV shows. Like any other Windows network share, they can be accessed by other computers on your network.

If you prefer, there are also other options like connecting a thumb drive or external hard drive to the PC running LiquidTV. And depending on what OS the PC has you may also be able to use a Remote Desktop connection to handle all this while sitting at another computer. 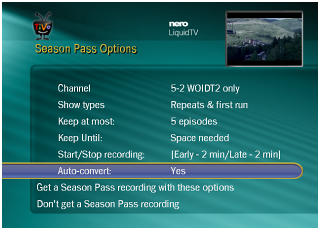 Something else your computer can do that a standalone TiVo can't is encoding from the MPEG-2 used for DTV broadcasts to MPEG-4. LiquidTV can encode to MPEG-4 AVC (with AAC audio) either automatically after capturing a show or as directed later from the Now Playing menu.

The compression feature can be used to either save space for recordings you intend to keep on your LiquidTV box or create copies for archiving on disc or playback on a portable media player. There's even an option to burn directly to a (data) DVD with no modification.

There are a few things that an actual TiVo box has which either aren't included in LiquidTV or simply can't be done with the available PC hardware. The most glaring issue is CableCARD support.

The USB tuner included with the LiquidTV retail bundle is capable of capturing QAM broadcasts, like what US digital cable broadcasts use. Unfortunately most of those broadcasts are encrypted, meaning you would need a CableCARD interface for capturing.

While every TiVo box has CableCARD support, only a select few PCs sold by OEMs are licensed to include it. You can still capture the analog output from your digital cable receiver, and even use the IR blaster included with the LiquidTV retail bundle to control it. But overall it's an inferior solution.

If you need to capture from an analog source, like the aforementioned cable box output or even the output from a satellite provider like DirecTV or Dish Network, you'll want to buy some hardware of your own.

Although the USB tuner bundled with LiquidTV includes support for these analog signals, it doesn't have a hardware MPEG-2 encoder. Realtime MPEG-2 encoding via software will almost always produce lower quality (or larger files) than using the hardware encoders found on good analog capture cards.

That's not to say the Hauppauge tuner shipped with LiquidTV isn't good. It's just primarily designed for digital capture instead of analog.

TiVo also includes a number of other features with their boxes. If you want to watch movies from Amazon VOD or Netflix, you'll need to exit LiquidTV and use those services' native clients.

The reasoning for this is that your PC can already handle that content without LiquidTV, but in my experience using the Netflix streaming service on my media center computer it's not very satisfying or user friendly without a third party interface.

Although most of my complaints were addressed in a recent update, LiquidTV isn't without a few problems. The one most likely to affect most people is a problem with more than two channel AC-3 (Dolby Digital) audio.

If your video has more than 2.1 channels in the audio stream you won't be able to hear them. Even if you're using passthrough to send the audio across a S/PDIF connection you will lose the surround information. It's a known bug which I've been told the developers are working on.

I also have some issues with the compression options. Besides the fact that (as a video geek) I'd rather have all the possible options at my disposal, the available profiles don't seem to use the obvious options. The video is resized and borders added for no obvious reason.

In addition there are a few features I would like to see added which would really put LiquidTV over the top for the average customer. To begin with it doesn't start automatically when you logon to your computer. There's a background service that will record your shows for you, but you need to manually add a shortcut to your Startup folder (on the Start menu) if you want the GUI to load automatically.

What's somewhat more frustrating is the update process. LiquidTV will automatically notify you (in a system Message) that there's an update available, and even start your browser and navigate to the download page. After that you need to use a mouse to complete the process.

A completely mouse-free process would be much nicer for those of us using LiquidTV purely as a set-top box replacement. It would also be an area where Nero could be head and shoulders above their competition.

For people like me who are still using old fashioned analog TVs, LiquidTV could also use some screen size adjustments. It's typical for the S-video output on a video card to produce an image which goes beyond the visible (active) area of most TVs.

Adding a setting to tell LiquidTV what area is visible on your TV would allow it to compensate. I've suggested this, and my other criticisms with Nero. Hopefully some of them will be addressed in future updates.

LiquidTV is not for everyone. It lacks the granular options available in many other PC DVR applications. And that seems to sum up its target market pretty well. Most of the software out there almost has to be tweaked for hours on end to do exactly what you want it to. LiquidTV has some options which can be adjusted, but by and large they are cosmetic rather than functional. If you like the look and feel of the TiVo interface it should provide exactly what you want.

Once Nero gets the few remaining issues worked out, and maybe adds more features, my rating could easily improve from a 7 to a 9 or 10.