The latest report from Asymco says it now costs Apple $1.3 billion to run iTunes on a yearly basis.

Horace Dediu used the numbers from Apple’s latest quarterly earnings and then cross referenced them average prices for music and apps to get a “content margin.”

The numbers used were:

Dediu estimates the monthly content margin now comes in at $113 million, which the editor believes all goes back into running the store and paying for traffic/payment processing and increasing storage capacity. 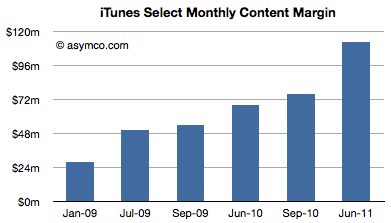