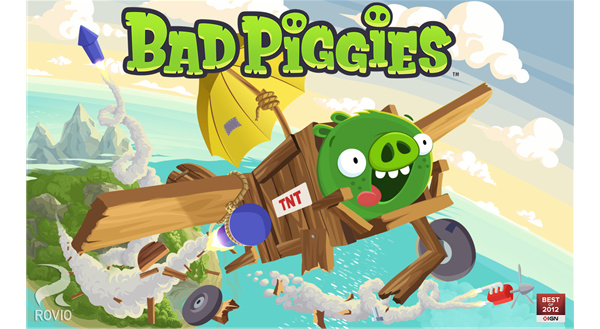 The developers behind the blockbuster franchise Angry Birds have come out with a new game that will give the pigs some revenge on those damn birds.

Rovio has launched "Bad Piggies" today for iOS, Android and Mac, launching the game in Taiwan: "We decided to choose Taipei as the place for the first global launch as it is one of the cities where 'Angry Birds' has been widely downloaded," said the company.

Angry Birds (and its multiple sequels) are the most downloaded mobile franchise of all-time, helping Rovio make a profit of 48 million euros on just 75 million euro revenue.

Create the ultimate flying/crawling/rolling/spinning/crashing device and pilot the pigs safely to the eggs!

The Bad Piggies are after the eggs again -- but as usual, nothing is going according to plan! Can you create the ultimate flying machine and steer them safely to their destination? Those tricky pigs have a few objects they can use, but they need your help to turn these into the perfect transportation!

With more than 60 levels, and free updates coming up, you have hours and hours of pig-crashing, exploding, and flying fun! Get three stars on every level to unlock 30 more puzzles! HINT: Sometimes you need to play the level several times to achieve all the objectives -- try building a new device or steering in a different way to earn all the stars!