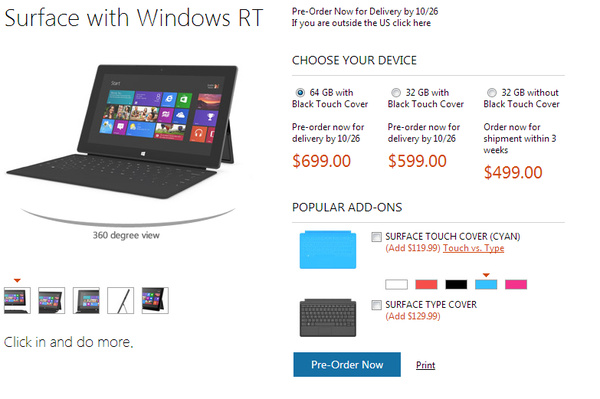 Four months after first unveiling the Surface, Microsoft has finally priced the tablet and begun pre-orders.

The tablet goes on sale on October 26th, and will cost $499 for a 32GB model with no accessories. Moving up the price ladder is the 32GB model with Surface Touch Cover in black for $599 and the 64GB model with cover for $699.

The Surface has a 16:9 display, 10.6-inch screen, the edges are beveled at 22 degrees, and is just 9.3mm thick. The display has Gorilla Glass 2 and you can connect to "the strongest Wi-Fi connection ever." The case is built of magnesium, and the "liquid metal is formed into an ultra rigid and light frame" while weighing just 1.5 lbs.

Additionally, the device has access to all Windows apps for music, movies and more, and all games from the Windows Store. Full Microsoft Office is installed, as well.