The Verge has reported today that Microsoft is creating a 7-inch gaming tablet called the Xbox Surface.

Sources supposedly confirmed the plans, with the company already in development of the tablet.

Specifications of the alleged tablet are an ARM-based Texas Instruments processor with 288MB of RLDRAM 2 and a resolution of 1280 x 720. The rest of the supposed specs are posted below.

Adds Tom Warren of the Verge:

Microsoft has developed a secret hardware production process for its Surface tablets that is separated from partners that traditionally manufacturer the company's Xbox console. We're told that the Xbox Surface will likely be manufactured in the same factory, but that any future "Xbox 720" console will be manufactured in mass quantities by companies like Pegatron or Foxconn.

We've learned that part of the Xbox Surface is being developed at Microsoft's offices in Silicon Valley. The software giant recently locked down several Xbox-related buildings, limiting employee access to the company's Interactive Entertainment Business division. The lock down is likely related to Microsoft's increased testing of the tablet, providing a way for other parts of the Xbox team to build games and software for the device. Providing the project doesn't get killed in favor of a full 7-inch Windows tablet, in the same way Microsoft axed Courier, expect to see the Xbox Surface debut ahead of Microsoft's future Xbox console. 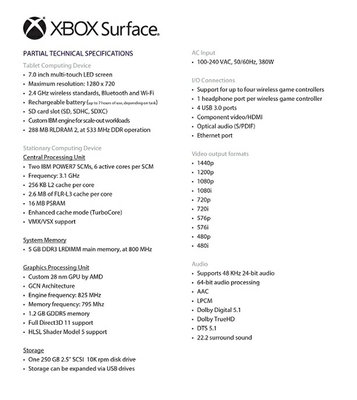