Each iTunes user generates $300 for the company 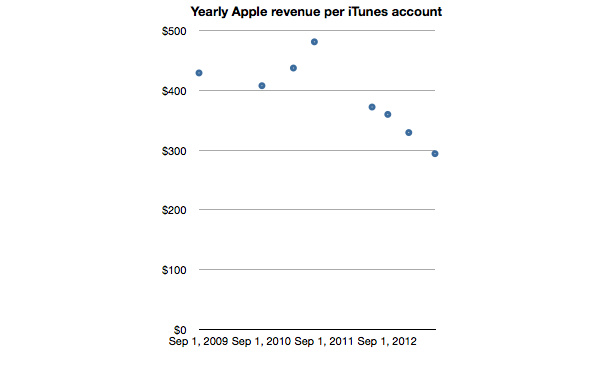 Earlier in the week, Apple announced that it had reached 575 million iTunes accounts, a huge jump from previous announcements.

Apple analyst Horace Dediu took a deeper look into the numbers, including gross revenue, and figured out that each iTunes account is worth $40 in iTunes spending to the company.

Then, Dediu took into account that most Apple fans don't just have an iTunes account, but more than likely have multiple Apple devices, as well.

By his calculations, which can be found here, each iTunes account is worth just about $300 per year to Apple, a hefty figure which is perhaps larger than Amazon's Prime member value.

Dediu also believes iTunes Radio, as long as it helps people discover music that they later buy, will significantly boost the figure.