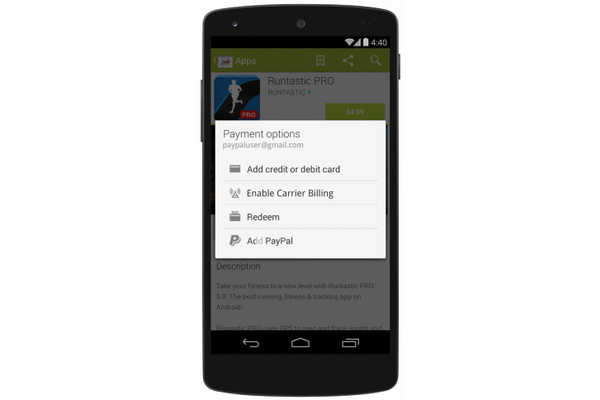 Google has revealed new updates to its Google Wallet payment system, including the addition of PayPal support.

Reads their post: "Starting today, we're making it possible for people to choose PayPal for their Google Play purchases in 12 countries, including the U.S., Germany, and Canada. When you make a purchase on Google Play in these countries, you'll find PayPal as an option in your Google Wallet; just enter your PayPal account login and you'll easily be able to make purchases. Our goal is to provide users with a frictionless payment experience, and this new integration is another example of how we work with partners from across the payments industry to deliver this to the user."

In addition, carrier billing has been expanded to seven more countries, and now totals 24. Google says about half of Google Play users can now utilize the carrier billing option.

Finally, developers from 13 new nations including Indonesia, Malaysia and Turkey can now sell apps, bringing that total to 45.