Minecraft headed to Xbox One, PS4, Vita this summer 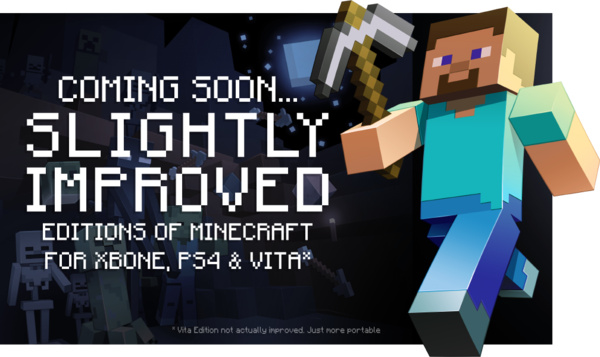 Mojang has announced this week that its popular Minecraft game will be headed to the Xbox One, PlayStation 4 and PS Vita this summer.

For both of the next-gen consoles, if you own the game for their predecessor console (Xbox 360 or PS3) you can get the updated title for an upgrade price of $5. Otherwise the game will cost $19.99 for new buyers.

The game will be available in the Xbox Live Marketplace in August and Xbox 360 version owners can import saved game data across consoles, as well as move their skins and texture packs over.

For the PS4, you will be able to import saves from the PS3 edition but you cannot import back to the PS3. The Vita version will go on sale at the same time for $20 bundled with the PS3 version.

You can find more info about each specific version through Mojang.