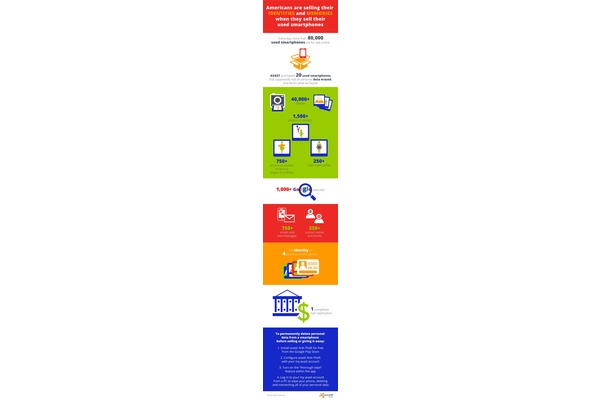 Avast, the makers of security products for mobile and desktop devices, are claiming that Android's built-in factory reset option does a poor job of really deleting your personal information.

Potentially hundreds of millions of Android users have used the option to wipe their phone before selling it, donating it, or trading it in for a new upgrade, which leaves a scary amount of data out there.

The security firm purchased 20 used Android smartphones from eBay and was able to recover 40,000 photos (including 250 nude selfies of men and 750 of nude or partially nude women), 750 emails and texts, 250 contacts and even the identities of four of the owners.

Avast mobile division president Jude McColgan says the resets are only "at the application layer" while "users thought they were doing a clean wipe and factory reinstall" that should have removed all of their data from the disks. The company used easily accessible forensic tools and drive imaging programs like FTK Imager to recover the data.

In their report, the company added: "Although at first glance the phones appeared thoroughly erased, we quickly retrieved a lot of private data. In most cases, we got to the low-level analysis, which helped us recover SMS and chat messages." Of course, there are not too many people out there that would know to use drive imaging programs to recover wiped data from a phone they bought on eBay, but the implications are terrifying for those that do. Avast does recommend their own Mobile Security application with Anti-Theft app (for free) for those that want a more secure erase.