After making an ill-received tablet last year and a better-received gaming handheld, Nvidia has come back with a vengeance combining the two with the new Shield Tablet.

The device, which is a full Android tablet at its core, can double as a gaming console, adding much more functionality than standalone devices can offer. Nvidia, which rules the PC video card market, knows gaming and has emphasized that expertise.

Under the hood, the company has also packed in high-end specs to a premium-feeling device with a price tag that is certainly competitive, but the company will have a battle against more well known consumer names like Samsung and Apple and Google.

Read ahead to learn about the powerful multi-function Nvidia Shield Tablet. 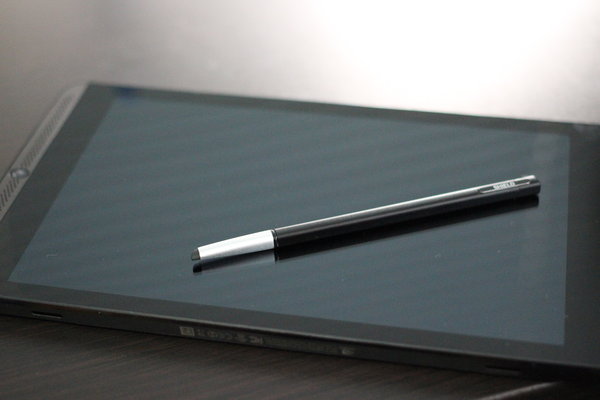 The Shield Tablet is powerful, plain and simple. The company has used their own brand new Tegra K1 processor clocked at 2.2GHz with a 192-core Kepler GPU. In every benchmark test, the processor destroys the competition and it shows when playing games or even just watching any kind of content. The processor is backed by 2GB of RAM, and the display is a nice 8-inch 1920x1200 IPS LCD.

As part of its unique features, the tablet includes a mini HDMI 1.4a input for "console mode" gaming (more on that later), dual stereo speakers, and a pop-out stylus for writing and drawing.

Although Android devices generally lack in the design department, the Shield Tablet provides a premium look and feel, using a metal frame, plastic edging and a widescreen display that makes the tablet an excellent landscape device and great for consuming content. While the device feels premium, that comes at a price since it is heavier than similar devices, notably at 390g (0.86 pounds), compared to the 7.9-inch iPad Mini with Retina at 0.73 pound (331g) and 0.66 (298g) for the Samsung Galaxy Tab S 8.4. 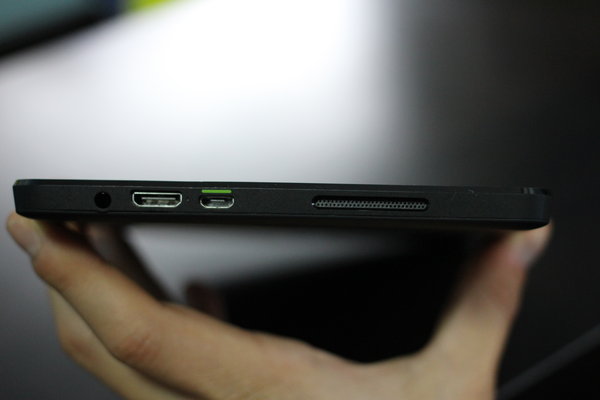 Additionally, the tablet is thicker than its rivals, at 9.2mm. By comparison, the iPad Mini with Retina is 7.5mm thick and the Tab S 8.4 is even thinner at 6.6mm. The weight may not be noticeable in the real world (although it still kind of is), the thickness is certainly noticeable. Regardless, the tablet feels sturdy and high-end and does not give off the cheap feel of most Android tablets.

The tablet has relatively large bezels, but the tablet does accommodate the aforementioned dual speakers and a full-sized front camera. Around the edges, which are matte plastic there is the power button, dual volume rockers, the microSD slot, and the embedded stylus. On the top we have the mini HDMI 1.4a input, the USB port and the headphone jack. While I liked the rest of the design, the buttons are horrid. You have to really press hard on the buttons to get them to work, and you should never have to worry about the pressure levels you need to get the device off of standby. Because of its widescreen and longer design, it is extremely hard to use with just one hand, but it is excellent for two handed use. These may be minor complaints for some, or deal breakers for others, but overall I was happy with the design and ergonomics of the Shield Tablet.

While the display may not have resolution as large as other new devices, the 1920x1200 (283ppi) screen performs admirably with nice sharp fonts, great viewing angles and solid brightness even when turned down. It does not compare to the new Galaxy Tab S' super AMOLED in brightness or color accuracy, but it is still absolutely fine for gaming and tasks. Overall, the disappointment with the display is its warm colors and its off-white whites.

Nvidia has also added in a pop-out stylus, which when taken out activates a few modes, mainly for notetaking and drawing. There is a cool Dabbler app to show off your watercolor painting skills, and the Evernote suite is pre-loaded on the tablet. Despite not having too many uses for the stylus myself, it worked as expected, and artists could have a ton of fun and major note takers will appreciate the pen compared to typing on the virtual keyboard. Overall, its just an added feature that helps the tablet differentiate itself.

I am a huge fan of the design and premium feel of the tablet (especially the widescreen and dual speaker) but Nvidia could have tried to keep the girth down a bit to keep in line with other high-end rivals. The performance is blazing due to the Tegra K1 processor and the display was good, but nothing special enough to really write home about. 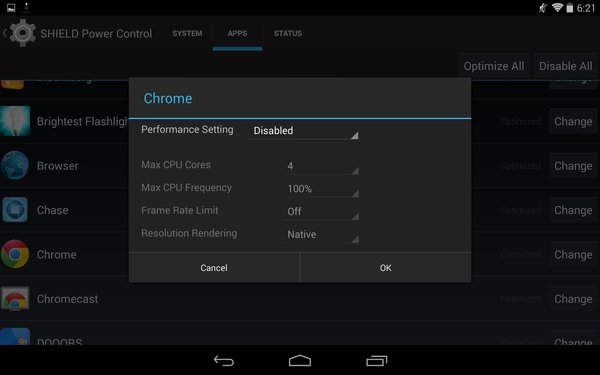 As more OEMs should do, Nvidia stuck with stock Android 4.4 KitKat for the Shield Tablet, adding just some very minor tweaks and their own Nvidia suite, as well the pre-loaded Evernote, Twitch and Just Write apps.

The company added a "Power Control" setting, which allows to you control the performance of specific apps, meaning if you want Chrome to go all out with all four cores and no frame rate limits, go ahead and do it. This is most notable when gaming, and you can select different pre-set levels like "Battery Savings" or "Max Performance" depending on how you are using the tablet at that time.

Unlike most of Samsung's features, nothing here feels forced or like "bloat" and it therefore made my experience much better being a Nexus owner since they launched and preferring stock Android. In fact, the additions felt a bit like CyanogenMod, which is never a bad thing. 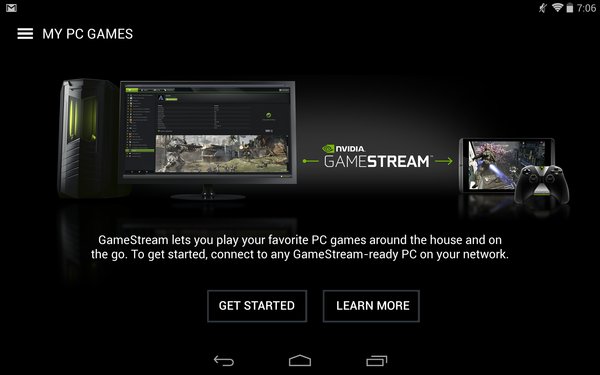 In the Nvidia suite we have "Shield Hub," "Dabbler," "Shield Wireless" and "Shield Console." The Hub brings you to a dedicated storefront and help page for Shield, allowing you to see your Android games, your media apps and your PC games that you have linked through GameStream. Depending on the specs you have for your home PC (hint: it must have a Nvidia GeForce 650 or higher), Gamestream lets you wirelessly access those games from your PC and play them on your tablet or connect the tablet to the TV and play from there. The feature is one of the killer software additions Nvidia launched with its Shield gaming handheld, and it continues to improve. 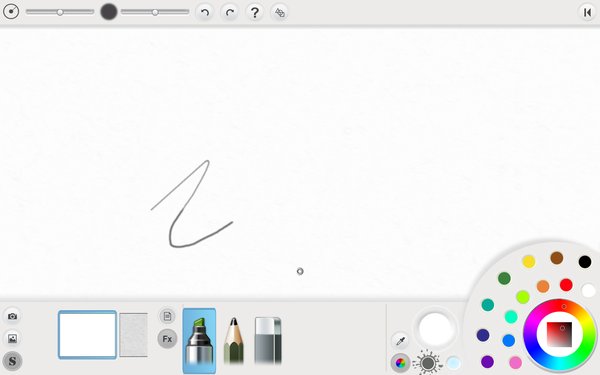 Dabbler is the painting app and although I have no artistic skills, it was fun to mess around with the stylus and the app. Nvidia made it easy to launch into fullscreen mode and even easier to get out of it, and pulling the stylus brings up the Stylus launcher with the most frequent options for apps requiring or using a stylus.

Shield Wireless lets you quickly and easily sync your Bluetooth controller (more on the controller later) and Shield Console lets you go into console mode and starting gaming on the big screen or mirror mode to cast your entire tablet home screen to the big screen. Both of those require a mini HDMI cable to be plugged in. You can also stream a movie and blast it right to the TV in console or mirror mode, making the tablet an expensive but well specced set-top box.

You can really tell that Nvidia wanted all these features to work, and they work great. I was completely satisfied with every feature that Nvidia added, and was extremely happy that they stuck to stock Android rather than filling the tablet with bloat and "beta" software that will inevitably be discontinued or updated in the months ahead. 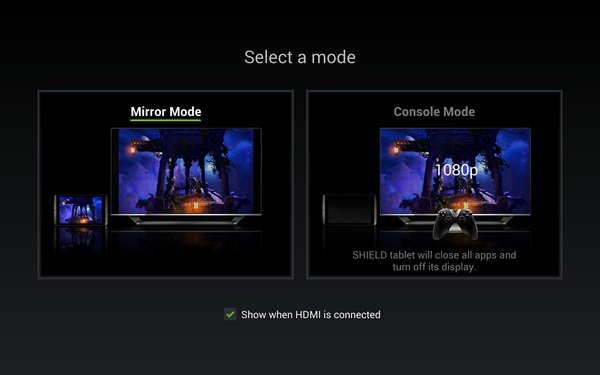 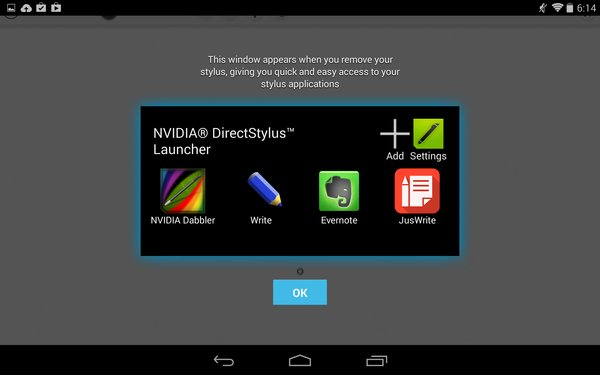 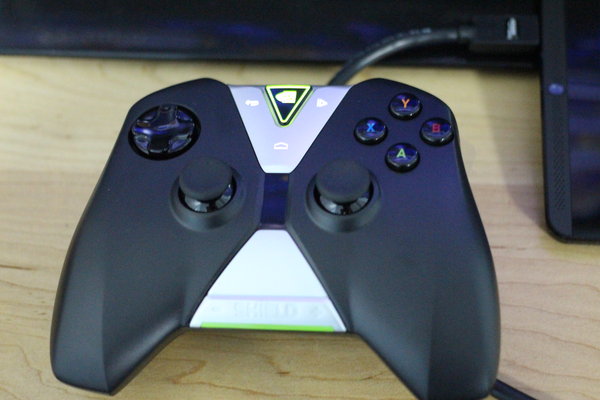 Let's face it. If you are buying the Nvidia Shield Tablet, it is not because you wanted an Android tablet. You are buying it because Nvidia knows gaming and knows it well.

We already mentioned the Shield Hub, where you can sort through your own installed games, but in the hub there is another money feature. There are a dozen Shield Tablet-optimized titles including Portal, Leo's Fortune, Half-Life 2 and the pre-installed Trine 2. Each is intended to work perfectly with the tablet and with the optional Wireless Controller, which at $59 is quite expensive but is a perfect companion for the device and big-screen gaming. 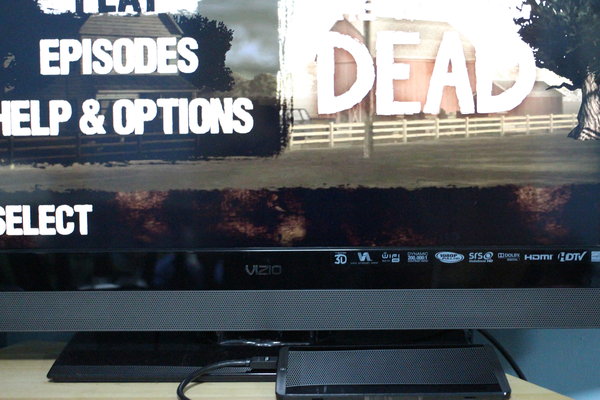 The controller connects through the Shield Wireless app using Wi-Fi Direct, offering high data throughput and low latency that means you are not seeing any lag when playing. When playing Trine and Walking Dead, I did not feel any lag that would make me remember I was using a wireless Bluetooth controller. The controls themselves are very standard (dual analogs, shoulders, XYAB and D Pad, but Nvidia also added volume +/- buttons, a headphone jack and a mic for voice control. Asking the controller to "launch Trine 2" worked most of the time, but the feature is not perfect yet.

In addition, the controller has a multi-function Start button, Android Home and Back buttons when using mirror mode for the tablet, and the multi-function Power/Connect button. If owning the tablet, and actually planning to use it for more than watching YouTube videos, the controller is a must and it is a fantastic accessory. At $59, it is expensive compared to other Bluetooth controllers you can pick up on eBay, but it also comes with a much better feature set and an overall better experience. 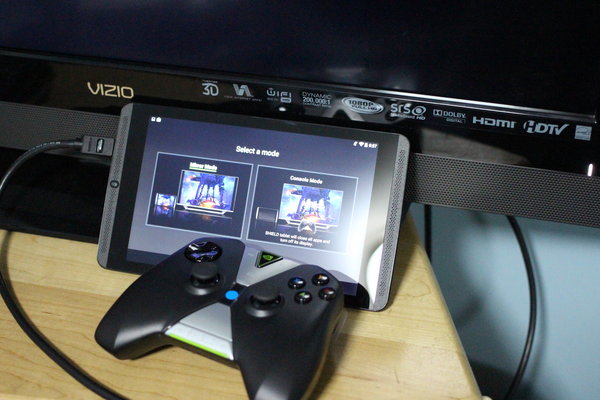 If using the headphones to pass audio, the controller is rated at 20 hours of gaming before it needs a charge. Unless you are hardcore, that means charging the controller likely once a week with the included USB cord. Not all games work well with the controller, unfortunately, even with Nvidia's Gamepad Mapper software, but more and more devs will begin making their games work into the future, that I can guarantee.

Finally, Nvidia also included Twitch.tv and integrated streaming capabilities, meaning you can play your games and stream them to Twitch just like your PS4/Xbox One counterparts are doing. The 5MP front facing camera can also be used to take your own videos and add commentary through the mic. To be able to do so from a tablet is an awesome experience. 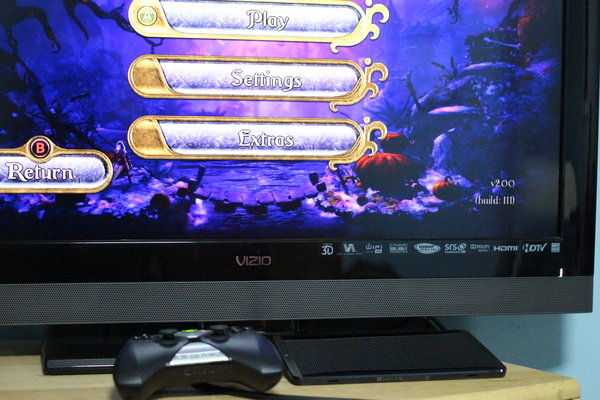 Nvidia knew what they were aiming for when they created the Shield Tablet, and they have succeeded. The company has built a tablet that passes the design test (even though it is fat and heavy), runs a stock Android with minor Nvidia tweaks and apps, has powerful specs (seriously, the K1 just kills anything else out there right now in the tablet space in all benchmark tests) and most importantly, includes unique features that have been properly implemented by the company.

At $299 for the Wi-Fi/16GB model or $399 for the LTE/32GB model, the tablet is priced competitively although the "optional" Wireless Controller is not really optional in this case and is a must-have accessory, tacking on $59 to your price. You also have to keep in mind that a full PlayStation 4 or Xbox One costs the same as the LTE model, so if you are into hardcore gaming, your money may be better spent elsewhere. If you want a powerful tablet, with multiple functions, a stylus for writing and drawing and great gaming features for the casual (or maybe more than casual) gamer, you have come to the right place and Nvidia has really knocked it out of the park.