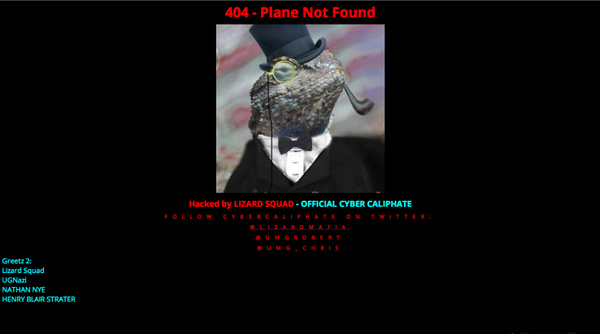 Lizard Squad, the group behind the DDoS that managed to take down Xbox Live and Sony's PlayStation Network on Christmas, has defaced Malaysia Airlines' site today, adding a tasteless joke, as well.

Besides their standard lizard with a top hat and monocle, the site added the text "404-Plane Not Found" referencing flight 370, which disappeared in March, killing over 200 passengers. Additionally, the group said "Hacked by LIZARD SQUAD-OFFICIAL CYBER CALIPHATE," referencing the group that claims association with the extremist terrorist group ISIS.

Malaysia Airlines confirmed the DNS compromise, but said they expect to be fully up and running within 72 hours. All user data is said to be secure, but Lizard Squad still promised a data dump and showed a screenshot purporting to show passenger's itineraries.

Going to dump some loot found on http://t.co/D9XYneQoaK servers soon