OnePlus officially unveiled their upcoming flagship device today during a VR event. The device appears to live up to the hype, and will be available on August 11th.

The device has a 5.5-inch 1080p display, is powered by a custom Snapdragon 810 v2.1 processor and 3 or 4GB or RAM depending on the model you choose. The selfie cam clocks in at 5MP while the standard camera is 13MP with OIS and two-tone flash.

Most importantly, OnePlus has managed to keep their margins razor thin and keep the price low, as well, with the 16GB storage/3GB RAM model selling for just $329 and the 64GB/4GB RAM model selling for just $389. Given the fact that the specs match up with any high-end phone out now, the prices are shocking and are about half the price you would pay for an unlocked Galaxy/Nexus/iPhone, etc.

The phone is also the first device to launch with the USB-C connector, so be prepared to buy all-new chargers all over again. As rumored, the phone also has a fingerprint scanner that OnePlus claims boldly is "faster than Apple's."

OnePlus is shipping the phone with Android 5.1 and their own OxygenOS user interface overlay on top.

If you are interested in purchasing, you will need to secure an invite from a OnePlus super fan, or you can sign up for their new waiting list which will offer phones on a first-come-first-served basis. 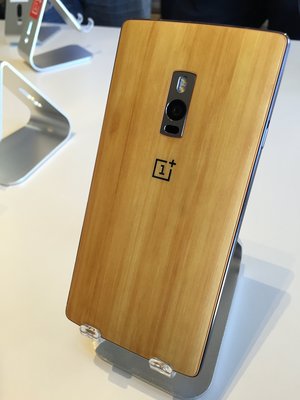 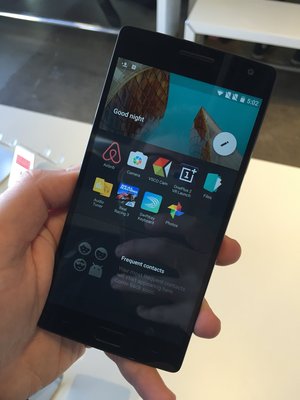 (Pics via Matt Weinberger of BI)