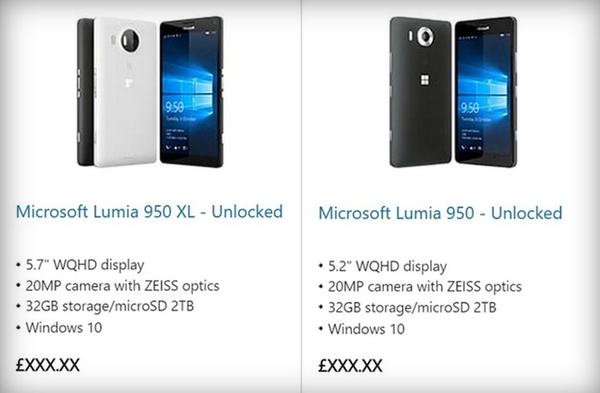 Microsoft accidentally posted specs for its highly-anticipated Lumia flagships, ahead of any official confirmation.

The Lumia 950 and 950 XL (codenamed Cityman and Talkman) will be Microsoft's Windows 10 reference devices, and there have been various leaks over the past nine months that appear to have been accurate given the new listings.

If you want the 950, you are getting a 5.2-inch WQHD display, Windows 10, 32GB internal storage (with a microSD slot for more) and a 20MP camera with a Carl Zeiss lens and optics. The 950 XL is basically the same, spec wise (from what we can see) except it will have a larger 5.7-inch WQHD display.

Although unlisted, both devices are expected to also have USB Type-C connections, wireless charging, Windows Hello biometric unlocking support, and support for the Surface Pen stylus.

Microsoft has an event set up for October 6th, where we expect to get an official unveiling of the devices and a new Surface tablet, as well.