Not too long ago Google tried fusing Google+ with YouTube comments, but that was not the way to go to Google backtracked. Ever since the company has been trying to find ways to allow more moderation in its service.

Obviously the aim is to remove unhealthy commentary and give more room for genuine and "good" comments. Now the comment section is being upgraded with new tools that allow content creators to rate their commenters more efficiently, TechCrunch reports.

In the future YouTubers can promote good comments to the top of the list with a new pinning feature. Pinning is restricted to one comment per video. Other new features include favoriting or giving a heart to comments they like as well as highlighted creator names that will be easier to spot among the comments. With verified creators there's also a checkmark beside the colored name.

Recently Google introduced YouTube Heroes which are community moderators who level up by reporting bad comments and content. It has received a lot of criticism and controversy and the opposition says it could result in policing that is not appropriate and doesn't reflect the platform. 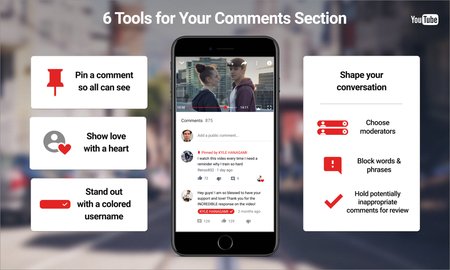