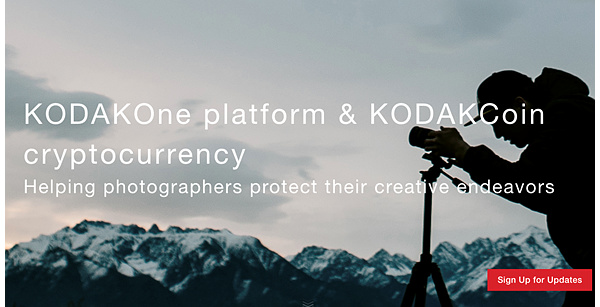 Many of you probably remember Kodak as the savior of your scuba diving trip with their disposable cameras. Or perhaps you've owned one the company's less iconic cameras. The company has a long history in cameras, but it's been closing in on bankruptcy for years.

Now, they've decided to take a bit of a detour from cameras and announced their own cryptocurrency.

Yeah, didn't expect that, did you? Except for the headline for the story, no one would have expected that. Unless you look at the current climate surrounding the blockchain technology and more specifically cryptocurrency.

Everyone seems to be chiming in and wants to get a piece of that action, whatever it will be worth in a few years. Now that Kodak's old technology and patents have largely been sold to the highest bidders, the company is trying to revive itself as a new type of company.

It still does, however, see itself very much in the photography space, so their new blockchain based platform KodakOne is meant for the photographers and media agencies. The KodakOne uses a proprietary cryptocurrency, I guess you could call it altcoin, called KodakCoin. So essentially you can buy and sell rights to use photos for KodakCoins.

The company revealed that the first KodakCoins will be available on January 31st.

Investors seem to love Kodak's move to cryptocurrencies and blockchain powered trading platforms. Kodak stock rose from a steady $3.10 briefly to over $12 and has settled slightly now to around $9.