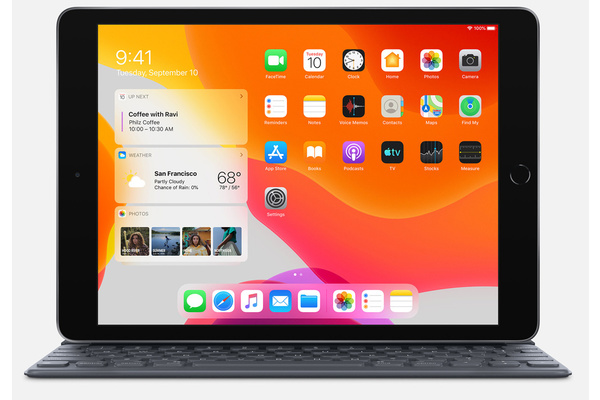 Even the new services got plenty of limelight, but there were other product releases too. One of them was the all-new seventh generation iPad.

I say all new, but in fact the iPad unveiled this week included some fairly dated hardware. While Apple calls it the first seventh generation iPad, it has a system-on-chip from 2016.

The new iPad comes requipped with a A10 Fusion chip, which means that it has the same processors as a iPhone 7. Not that A10 is a lousy chip, and you probably don't need anything better for your daily browsing and Instagramming &ndahs or whatever the kids do these days.

Also, fortunately the slightly obsolete equipment means that you won't have to break into your nephew's piggy bank to afford it. A $329 starting price tag seems like a good deal for an iPad.

It comes with a new, larger 10.2 inch Retina display, and supports first-generation Apple Pencil as well as the full-sized Smart Keyboard. The charging port is still the Lightning type, though.

It will be available on September 30th in Silver, Space Gray, and Gold. Prices start at $329 for the WiFi model and $459 for the WiFi+Cellular model. You can choose between 32GB and 128GB storage options.