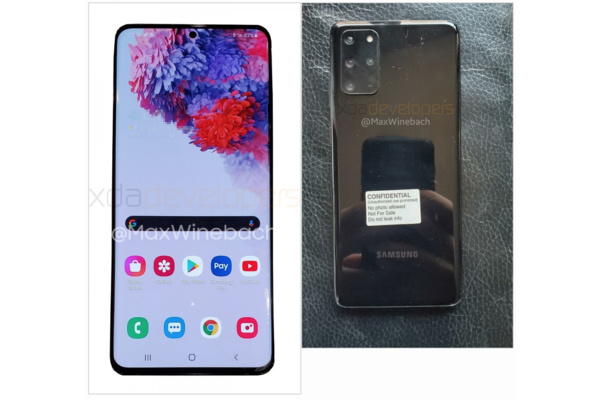 Samsung announced their upcoming Unpacked press event a week or so ago, and there's still four weeks until the unveiling of their newest flagship phones.

However, thanks to leakers, we have a fairly convincing couple of pictures that reveal what the top-of-the-line Samsung will look in 2020.

Speaking of 2020, the phone isn't going to be called S11 as the Korean company is going to cut the consecutive naming scheme first time ever. The new phone is called Galaxy S20, according to the rumors and leaks.

Now to the pictures themselves. According to XDA-Developers, who've managed to get hold of a picture of the S20+ variant, there's going to be three models: Galaxy S20, S20+, and S20 Ultra.

The middle model pictured, which seems to take place of the "regular" one, has a notchless and nearly bezel-free display with a hole-punch camera in the top middle of the phone.

Looks quite similar to the predecessor. In the back, however, the changes are abundant, specifically in the camera department. As suggested by previous rumors, the Galaxy S20+ will have a large camera hump with no less than four cameras.

In addition to the four cameras, that'll likely include at least super wide angle and a zoom one in addition to the regular camera, you'll spot flash (top right) as well as the microphone (top bottom) in the same hump.

Unfortunately there's not really much specs or features leaked at this point, but we might get more information in the coming weeks before the launch. We've previously addressed what rumors suggest you should expect of the phone here.