Android closes in on RIM for top US smartphone market share

According to comScore's latest figures, Google's Android smartphone OS is closing in on RIM's BlackBerry OS for most popular mobile OS in the U.S.

In the smartphone market, RIM remained on the top, at 31.6 percent, taking a -5.7 point change YoY.

Apple kept its ongoing growth, moving .7 points to 25 percent, while Windows fell to 8.4 percent and Palm fell to 3.7 percent. 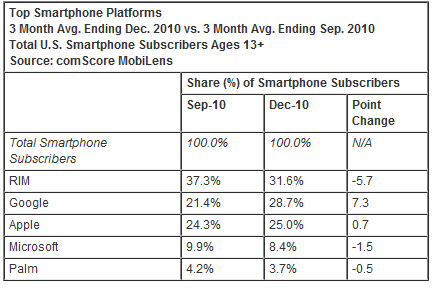